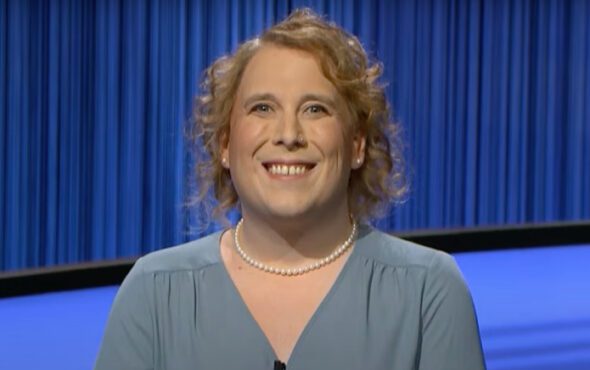 Amy Schneider has become the first out trans Jeopardy! contestant to compete in the yearly Tournament of Champions.

Over the last few weeks, Amy has defended her title as Jeopardy’s! reigning champion. The engineering manager first made her debut during Trans Awareness Week on 17 November.

On the recent Black Friday episode, Amy took home her eighth win and brought her prize earnings to a total of $295,200.

With over five wins under her belt, she now qualifies for the prestigious Tournament of Champions.

The forthcoming competition will see Amy compete against 14 previous contestants who earned five consecutive wins during their time on the series.

In a written editorial piece for Newsweek, the California native opened up about her recent qualification and the other trans contestants that came before her.

“It’s a strange thing to think that I have made history as the first trans person to qualify for the Jeopardy! Tournament of Champions,” she said.

“It was inspirational for me to see transgender contestants on the show before I became a contestant and I hope that I am now doing that same thing for all the other trans Jeopardy! fans out there.

“I hope I have given them the opportunity to see a trans person succeed. Until very recently trans people didn’t see themselves doing much out in the world, so to actually see something like this happen really opens your mind up to possibilities.”

Amy gave further details regarding her Jeopardy! journey and her rescheduled appearance in a previous interview with the publication.

“It’s sad, because I was originally scheduled to be on the show last year and between COVID and, I assume, his poor health, I was down there and they said, ‘We’ll have to reschedule. We’ll get you back on,’” she explained.

“It was really disappointing not to get a chance to be on the show with Alex. It was a bummer, but things happen for a reason. And I don’t know that I’d have done as well last fall compared to now.”

She also gave insight into how she prepared for certain categories and revealed that her girlfriend gave her “a little bit more knowledge” regarding the pop culture sections.

In terms of the future, Amy said she is looking forward to travelling and potentially buying a house with her earnings.

“My girlfriend and I have been talking quite a bit about how we’ll spend my Jeopardy! winnings. We have been planning to try and travel a bit more, and my $170,400 winnings so far will at least make that a lot easier,” she said.

“I’m planning to visit a friend in Ireland and I really liked Tokyo, so that’s a place I’d like to go back to again. Otherwise, we’re looking at buying a house in Oakland. I’m very happy here, I tell people that I expect to be here my whole life.”

An air date for Jeopardy’s! Tournament of Champions is to be determined.