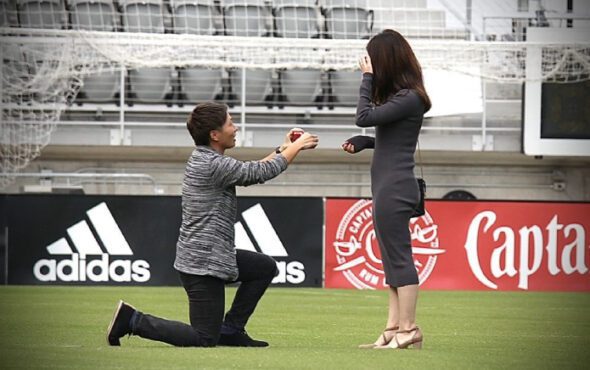 Kumi Yokoyama, a transgender footballer, got engaged to his girlfriend during a proposal at Washington, D.C.’s Audi Field.

The athlete shared the news with the world in a social media post on 26 October which has now gone viral.

“She said “YES,” they wrote alongside images of the proposal. “Thank you for everyone!!!”

Yokoyama asked the big question on the couple’s anniversary at Washington, D.C.’s Audi Field, where he plays for the National Women’s Soccer League’s Washington Spirit.

The 28-year-old came out as transgender in June, sharing that their girlfriend gave them the courage to do so.

“In the future, I want to quit soccer and live as a man,” the player said in a YouTube video at the time.

“Coming out wasn’t something I was enthusiastic about, but if I think about my life going forward, it would be harder to live closeted so I found the courage to come out.”

Yokoyama also revealed that they started to undergo gender-affirming procedures.

“I never saw myself as a girl, so I hated puberty,” they explained. “When I reached adulthood, I thought I’d maybe play soccer for another one or two years, so after that season ended I had my breasts removed.

“Normally you can’t have it unless you’re receiving hormones, but my doctor understood my situation. I would have been caught by doping sets if I was on hormones, so I just had the top surgery.”

Since coming out the former Nadeshiko striker has received nothing but support from their teammates and other Japanese athletes.

“When I first told my teammates I was even told it was uncool to hide,” they said. “I had to explain to them what Japanese culture is like and why I felt the need to hide.”

Later on in the interview, they elaborated on how the LGBTQ+ community is viewed in Japan and the type of impact they hope to make.

“More people in Japan are becoming familiar with the acronym LGBTQ and it’s seen more [in the media], but I thought if influential people like myself don’t come out and use their voices [awareness and acceptance] won’t grow,” they said.

Yokoyama is now the highest-profile athlete in Japan to come out as part of the LGBTQ+ community.

She said “YES”!
Thank you for everyone!!! pic.twitter.com/BqVFebzGFG