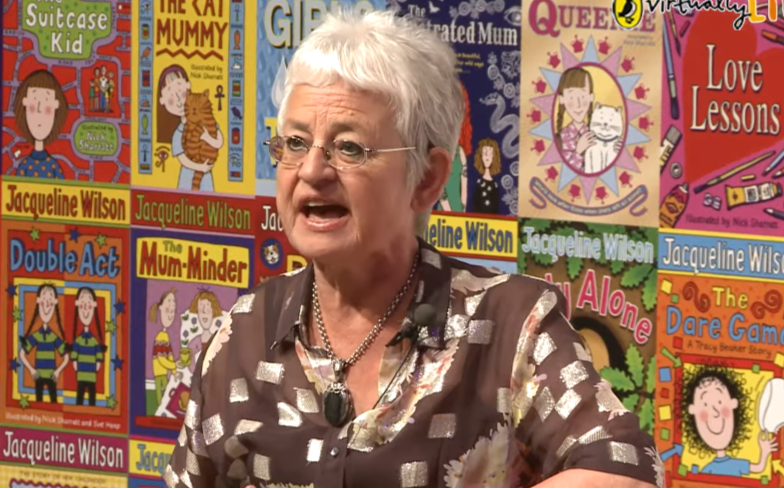 She said her announcement would be “old news” to anyone who knew her.

Jacqueline Wilson, best known for writing the children’s book series The Story of Tracy Beaker, has come out as gay ahead of the release of her latest book, Love Frankie, which is an LGBTQ love story.

Speaking to The Guardian about the book’s subject matter, Jacqueline said she put her “heart and soul” into the book, knowing “perfectly well that it would shine a little light on my own private life.”

Jacqueline explained that she met her partner, Trish, after the breakdown of her previous marriage. Although Jacqueline hadn’t spoken about Trish before, she said the people in her life knew they were a couple.

“I’ve never really been in any kind of closet,” she explained. “It would be such old news for anybody that has ever known anything much about me.

“Even the vaguest acquaintance knows perfectly well that we are a couple.”

Jacqueline added that the only person who was “devastated” was her mother, but she laughed it off, explaining that her mother “cordially hated my ex-husband; she didn’t really approve of any of my friends.”

When asked about why she’d never focused on gay characters in her books before, she said she said she wanted to write stories about children facing problems and there wasn’t “any problem whatsoever with being gay.”

However, she shook off claims that she could be a role model for young queer girls, saying: “I don’t think that girls would ever want a grey-haired, wrinkly writer as a role model if they were wanting to feel good about maybe being gay.

“I’m sure they could find much more glamorous examples.”

A synopsis for Love Frankie, which releases in August, reads: “Frankie is nearly fourteen and teenage life certainly comes with its ups and downs.

“Her mum is seriously ill with MS and Frankie can feel herself growing up quickly, no thanks to Sally and her gang of bullies at school.

“When Sally turns out to be not-so-mean after all, they strike up a friendship and are suddenly spending all of their time together.

“But Frankie starts to wonder whether these feelings she has for Sally are stronger than her other friendships. Might she really be in love?

“Frankie doesn’t want Sally to just be her friend. She wants her to be her girlfriend. But does Sally feel the same?”