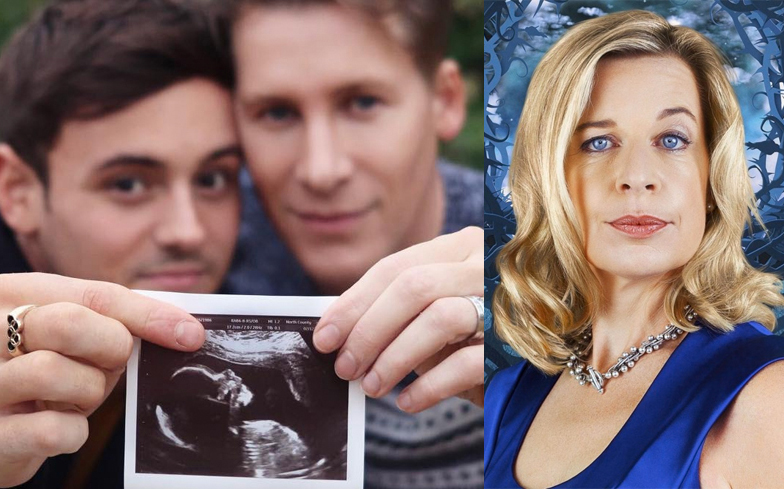 When they made the announcement on Valentine’s Day that they’d be having a baby together, Tom and Dustin faced hate from not only homophobes and right-wing press, where it’s almost expected, but also from fellow LGBTQ people.

In a column for the Daily Mail, right-wing journalist Richard Littlejohn joked that someone should “pass [him] the sick bag” after seeing a photo of their ultrasound scan on social media, and accused them of pulling a ‘publicity stunt’ with the baby.

Now that Tom and Dustin have revealed the sex of their unborn baby (it’s a boy!), the couple have faced even more hate, this time from controversy-courting media personality Katie Hopkins – no surprise there, then.

“And with Amazon Prime Now they get free next day delivery,” she tweeted in response to the baby news, mocking their decision to have a child via a surrogate mother.

Responding to the hateful comment, Dustin tried to educate on the process of surrogacy.

“For any who care to understand this process, surrogacy for gay & straight parents as well as most pregnancies requiring medical assistance can take years longer than those that don’t,” he wrote.

“And pregnancies requiring medical help come with their very own hopes, heartbreaks & joy.”

And he wasn’t the only one to hit back at Katie, although Tom took a slightly more sassy approach with his reply…

“It’s actually a 2 hour delivery service. Not next day. Sorry hun. Love ya babez,” he wrote.

is actually a 2 hour delivery service. Not next day. Sorry Hun. Love ya babez

Katie replied: “As fast as that? Bless you and your one-click baby order. Women labour hard so we may know the pain of love. Knowing the pain of loss is a different thing, lovely man. Only YOU can heal it.”

“LOVE is the only winner at the end of the day,” Tom fired back, “not the hate you spread.”

LOVE is the winner at the end of the day, not the hate you spread. ❤️