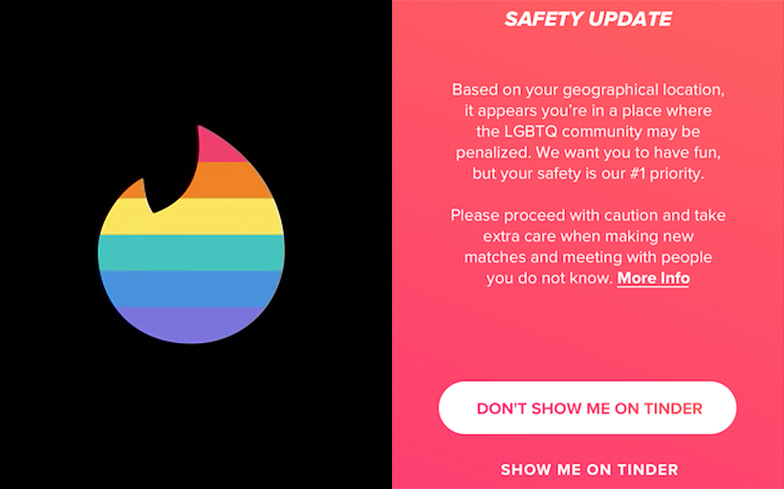 Tinder’s keeping its LGBTQ users safe across the world.

The popular dating app has launched a brand new safety feature for LGBTQ users travelling the world called the Traveller Alert, which informs users of any possible dangers in countries with homophobic and transphobic legislations.

Once a member of the LGBTQ community lands in an at-risk country, the Traveller Alert will recognise their location and they will not automatically appear on Tinder in that country.

Users will then have the choice to remain hidden or opt into making their profile public, essentially offering protection from law enforcement agencies and homophobic aggressors that may be looking to target them through social media platforms.

“We fundamentally believe that everyone should be able to love who they want to love – and we strive to reflect this in everything we do at Tinder,” said Elie Seidman, CEO of Tinder.

“It is unthinkable that, in 2019, there are still countries with legislation in place that deprives people of this basic right.”

The new Traveller Alert feature is expected to roll out over the coming days. After the success of My Move, an optional feature which allowed women to message matches first, Tinder is now making sure to take care of their LGBTQ users.

The app recently released a sexual orientation and gender identity option to provide a more inclusive experience for it’s LGBTQ users, providing equal opportunities and a more specific experience for its customers.

“We serve all communities – no matter their gender identity or sexual orientation – and we are proud to offer features that help keep them safe,” added Elie.

Shockingly there are 70 or so countries across the globe which have discriminatory laws criminalising those with LGBTQ status. Tinder has now developed a feature to actively tackle, and provide safety for those visiting these countries.

Tinder has sourced data from ILGA World’s most recent State-Sponsored Homophobia report to help determine which countries these alerts are necessary in.

“We hope that this development will raise awareness amongst all Tinder users, and help protect people of diverse sexual orientations in the 69 countries around the world that currently still criminalise same-sex love,” said André du Plessis, Executive Director at ILGA World.

“We work hard to change practices, laws and attitudes that put LGBTQ people at risk – including the use of dating apps to target our community  – but in the meantime, the safety of our communities also depends on supporting their digital safety.” If you would like to learn more you can visit ILGA World’s 2019 resources focused on sexual orientation laws. This link will also be available on Tinder’s Travel Alert feature.

Tinder are proving themselves to be genuine allies to the LGBTQ community and not just ‘pink-washing’ (being solely concerned with appearing progressive). They are using their platform to actively support and provide positive and safe experiences for all involved.