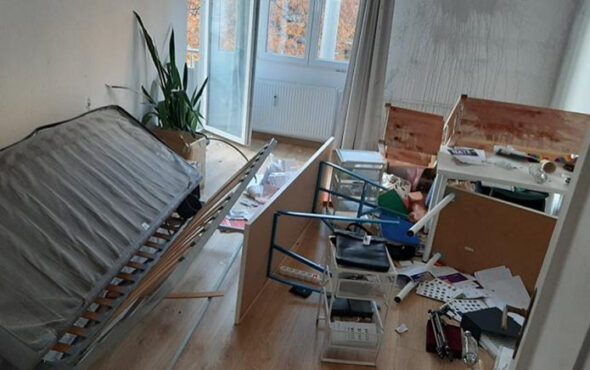 One of Bulgaria’s far-right presidential candidates is suspected of leading a gang during an attack on an LGBTQ+ community centre.

On 30 October, the Rainbow Hub in Sofia, Bulgaria, was attacked by a group of 10 men who were allegedly led by Boyan Rassate.

Rassate is a self-proclaimed national socialist with the Bulgarian National Union party running for presidential office in the 14 November elections.

The incident happened during a trans community event, with the assailants vandalising the space and smashing equipment.

“They entered and just spread around all the rooms and started to break everything,” she continued.

Filipova says that Rassate punched her in the face, with another attacker slashing the tyres of a scooter parked inside the establishment.

Bulgaria’s Central Election Commission has revoked Rassate’s immunity at the request of the country’s prosecutor general, meaning that he could be prosecuted before the elections take place.

In a statement, the prosecutor general said Rassate was “a perpetrator” who “committed indecent acts, grossly violating public order and expressing manifest disrespect for society”.

Images of the community centre were circulated on social media by the Bilitis Foundation, the oldest active LGBTQ+ organisation in the country that manages the Rainbow Hub.

“Our office and LGBTI community center in Sofia – Rainbow Hub – was attacked tonight during a trans community gathering,” the Foundation wrote on Twitter. “The leader of the attack Boyan Rasate is well known for his LGBTI-phobic actions and statements, and is currently running for president in Bulgaria.”

Amnesty International is calling for a full investigation into both the candidate and the weekend’s events more generally.

Massimo Moratti, Amnesty International’s Europe Deputy Director, said: “Boyan Rassate is reported to have been among those who attacked the Rainbow Hub Community Centre, destroying property and assaulting at least one person.

“The decision to revoke Boyan Rassate’s political immunity must be a first step in ensuring that all those behind this vicious attack are investigated and brought to justice.

“The Bulgarian authorities must now take urgent measures to stop politicians and political parties from scapegoating the LGBTI community and make clear that this kind of violence has no place in politics.”

Amnesty International is also calling on the country to protect the community through legislation.

“Crucially, they must amend the law to recognise homophobic and transphobic violence as hate crimes,” Moratti added.

“There is no doubt that the attack on the Rainbow Hub Community Centre was motivated by hatred, and this appalling incident has exposed the shortcomings of Bulgaria’s laws and justice system.

“The Rainbow Hub Community Centre is an initiative providing capacity building and support to the LGBTI community in Bulgaria to mobilise and advocate for their rights. We applaud their vital work defending LGBTI rights and stand with them in the face of hatred.”

Our office and LGBTI community center in #Sofia – Rainbow Hub, was attacked tonight during a #trans community gathering. The leader of the attack Boyan Rasate is well known for his LGBTI-phobic actions and statements, and is currently running for President in #Bulgaria (read ⬇️) pic.twitter.com/StwibomFGL