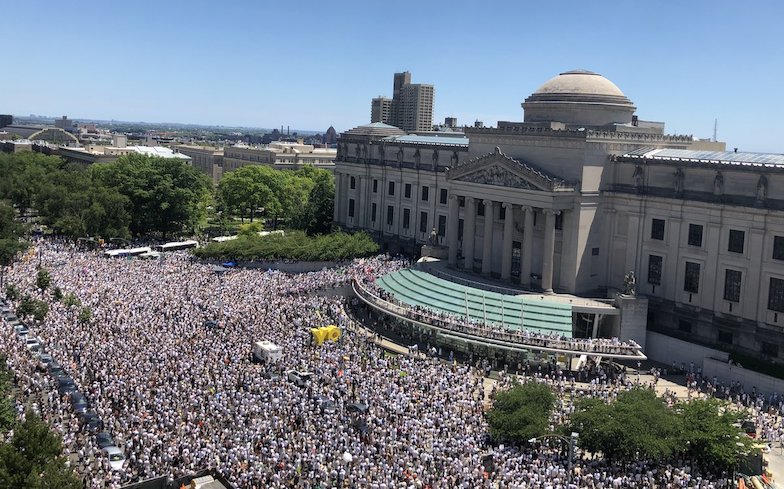 Thousands of protesters gathered at the Brooklyn Museum in New York on Sunday (14 June) in solidarity with the Black trans community.

The rally, co-organised by LGBTQ+ groups such as the Marsha P. Johnson Institute, The Okra Project and Black Trans Femmes in the Arts, kicked off at 1pm in front of the museum, a short distance from Brooklyn’s Grand Army Plaza.

The Black Trans Lives Matter rally in New York, one of many across the United States, came after the murders of two Black trans women: Dominique “Rem’Mie” Fells, 27, of Philadelphia, and Riah Milton, 25, of Cincinnati, Ohio.

The dismembered body of Dominique was found in the Schuylkill River, while Riah was lured into a park by her attackers and shot to death. Their murders are believed to be the 13th and 14th killings of trans individuals in the US this year.

The demonstrators all wore white as a tribute to Black history. In 1917, 10,000 protestors wore white in the NAACP’s Silent Protest in New York, which is one of the first recorded demonstrations for Black civil rights.

As well as Raquel, speakers included author Ceyenne Doroshow and the family of Layleen Polanco, a 27-year-old trans woman of colour who died in solitary last year after guards waited 90 minutes to call for help.

In an interview with CNN, Raquel said it was important for the rally to be organised by non-trans people, while making sure the spotlight was firmly place on trans activists and LGBTQ+ organisations.

“This collective of folks is particularly powerful because it’s modeling what is possible when you do have allies and folks who do care and also want to make sure that they’re building something that speaks to the hearts of the actual people that they’re representing,” she told CNN. “So often that doesn’t happen.”

The protests for Black trans lives arrive just weeks after demonstrations erupted across the world in support of the Black Lives Matter movement, which came to fruition following the murder of George Floyd.

Of the 14 trans individuals killed in the United States this year, 10 have been trans women of colour. 26 trans people were also murdered in 2019, a majority of which were Black trans women.

“I don’t think that anybody would say that there’s been enough attention focused on and around trans people and the state of violence they live in,” said Tori Cooper of the Human Rights Campaign (HRC), an LGBTQ+ advocacy group.

“I think it is a weakness of the Black Lives Matter movement. We only speak out when Black men are being harmed or murdered.”

The protests also follow the shocking and abhorrent announcement that Donald Trump’s administration are rolling back non-discrimination protections for trans patients in healthcare.