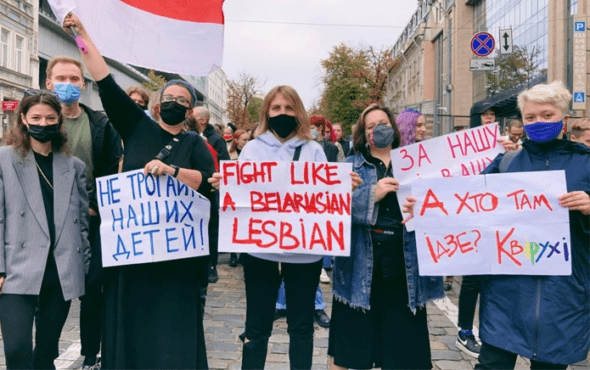 Close to 7,000 people have gathered in Kyiv, the Ukrainian capital, for the annual March for Equality in support of the LGBTQ+ community.

On Sunday (September 19), thousands took to the streets to peacefully march in solidarity with the LGBTQ+ community in Ukraine.

The March for Equality, a yearly parade, was called off last year due to the COVID-19 outbreak. On Sunday’s march, it has been reported an estimated 7,000 people participated, Reuters reports.

In 2019, 8,000 supports showed up which has been the March for Equality’s biggest turnout since the launch of the event nearly 10 years ago.

Attendees of the parade displayed Pride banners, slogans and signs that included messages such as “Disability Love Pride” and “Leave No One Behind”, as crowds walked through the central streets of Kyiv.

“We’ve grown tired of waiting for change and enduring systematic intimidation, pressure, disruption of peaceful events, attacks on activists and the LGBT community,” the marchers said in a statement. “We demand changes here and now, as we want to live freely in our own country.”

Despite the peaceful protest, the pro-LGBTQ+ marchers were met by police as anti-gay rights protesters gathered nearby.

“So fantastic to be out on the streets alongside my cool @UKinUkraine colleagues and friends supporting LGBTQ groups in Ukraine #Pride2021 #kyivpride @KyivPride #Ukraine,” British Ambassador Melinda Simmons posted on Twitter.

So fantastic to be out on the streets alongside my cool @UKinUkraine colleagues and friends supporting LGBTQ groups in Ukraine #Pride2021 #kyivpride @KyivPride #Ukraine pic.twitter.com/HFoUbzSOVF

The Ukrainian government has gradually increased support for LGBTQ+ rights. Most notably, the country’s Parliament passed legislation, in 2015, to ban LGBTQ+ discrimination in the workplace. However, Ukraine is yet to legalise same-sex marriage or the right to adopt.

“This is already the 10th pride, it was successful, it went calmly,” Leni Emson, director of the KyivPride non-government organization, told journalists.

The significance of the march can not be understated. Homophobia is prominent in Ukraine. According to a survey by the sociological group “Rating”, 47% of respondents shared a negative view of the LGBTQ+ community in a study published in August.