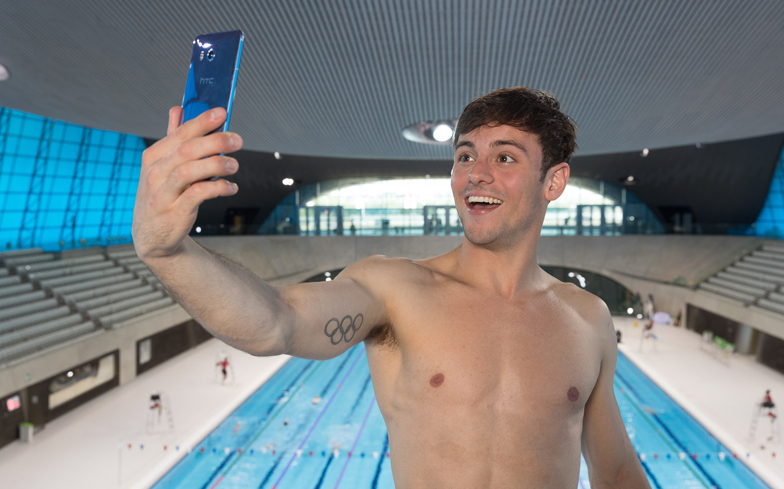 An advert starring Olympic diver Tom Daley and created by smartphone brand HTC has been criticised for being misleading.

The commercial features the sports star diving into an Olympic pool while taking selfies on the HTC U11 handset, before leaving the water with the phone still in hand.

However, while the smartphone has been rated water-resistant up to a depth of one metre, it means its likely it wouldn’t survive a dive into a pool.

The HTC website even states: “This phone is water resistant if it is briefly submerged by accident in fresh water less than 1 meter deep… do not expose the phone to sea water, swimming pools, spas, hot water, and hot springs.”

Of course, this is at odds with their advertising campaign with Tom Daley and his diving selfies, despite the company arguing that it doesn’t suggest that he brought the phone underwater.

HTC said that he could have “held the phone above his head” after landing in the water, falling in line with their one metre water-resistant depth.

The Advertising Standards Agency were not having it though, stating: “While we acknowledged that a professional Olympic athlete such as Tom Daley would be able to dive from a 10-metre high diving board and keep within the 1m distance required, we considered it unlikely that a consumer attempting something similar would be able to avoid being submerged to a depth which did not exceed, even briefly, that measurement. “Because consumers were likely to understand that the product could deliberately be submerged in a swimming pool and that no precautions were required to be taken after it had been immersed to preserve the product’s performance, and because that was not the case, we concluded that the ad exaggerated the capability of the product and was misleading.”

As a result, HTC pulled the video from their channels.

“We are disappointed by the ASA ruling, but have removed the video from our sites,” a spokesperson said.

“The video was part of an extreme selfies series designed to showcase the squeezable function of the new HTC U11, which allows you to take one-handed selfies with ease, even in more extreme situations such as diving.

“The video contained confirmation that HTC U11 has an IP67 rating with direction to HTC.com where that rating is explained in detail, but we apologise if anyone felt misled as to the handset’s water resistant capabilities.”

Meanwhile, Tom Daley recently announced that he is to become a father with his husband Dustin Lance Black, with the couple expecting their first born via a surrogate in the coming months.

However, they faced backlash from certain parts of the press, and were forced to defend their decision to start a family.

“My reaction to others’ hate, bigotry and misinformation will not include anger or hate,” Dustin wrote, alongside a throwback picture of himself and Tom on honeymoon in Hawaii last year.