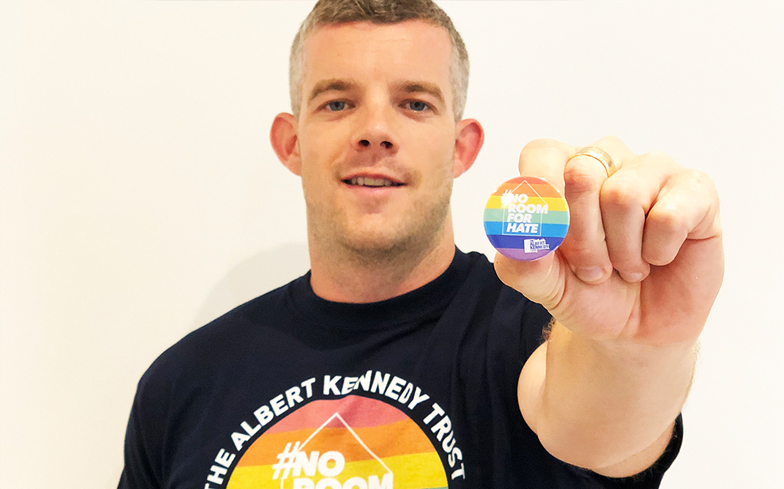 This year’s theme is Peace, Reconciliation and Activism. The Albert Kennedy Trust – which epitomises these values – is also celebrating its thirtieth birthday this year.

AKT help young LGBTQ people facing homelessness. Albert Kennedy’s story is as relevant today as it was 30 years ago. LGBTQ youth homelessness remains a massive problem in the UK today, with a staggering quarter of young homeless people identifying as LGBTQ.

Albert, a 16-year-old young gay man, fell from the roof of a car park in central Manchester on 13 April 1989. It is unclear how Albert died. He was out on a Friday night with his friend Paul in the gay district. Paul recounted how they were chased up the stairs of the car park by a homophobic gang of men, but it was only Albert who ended up on the roof.

Section 28 of The Local Government Act 1988, which prohibited the discussion of LGBTQ relationships in schools, had been passed the previous year, indicative of the homophobia at the time. A witness heard Albert shouting for help just before 2 am, as he stood on the ledge of the car park roof. Shortly afterwards he was dead in the street below. The inquest recorded death by misadventure, the police unable to find evidence relating to the men who had chased Albert and Paul.

Many of us will be familiar with the area where Albert died. I was myself 16 when I first explored Canal Street around the turn of the millennium. I loved the liberation and acceptance that Manchester’s gay scene provided. I had a fake student ID, obtained over the internet, which none of the bouncers at bars and clubs ever questioned. For me, exploring Canal Street was a rite of passage and, in my view, there is nothing abnormal about Albert wanting to do the same.

Albert was in the care of Salford Social Services, a resident of the Grange children’s home in Eccles. Whilst there he was often victimised by other residents on account of his sexuality. Someone wrote “poof” across his bedroom mirror, whilst others urinated in his bed.

It was Albert’s death which galvanised Cath Hall, one of AKT’s heroes, to found the organisation with a group of supporters in 1989. She met Albert on a number of occasions and, as a foster parent, was aware that other young LGBTQ people were experiencing similar problems in the care system. Through an LGBTQ group she discovered that many young LGBTQ people, as they Came Out or were “outed” by siblings or friends, experienced rejection and violence from their families. Another founder trustee, who has helped guide AKT over the last 30 years and is the charity’s current President, is Hugh Fell. Hugh noted the desperation of young LGBTQ people at the time of Albert’s death and helped Cath turn the anger she felt into a positive vehicle for change.

I cannot write about AKT without mentioning its Chief Executive Tim Sigsworth. Tim joined the charity in 2007 and has taken the debate around LGBTQ homelessness to new levels. I have seen Tim in action numerous times, always fighting passionately for young LGBTQ homeless people. He is incredibly effective at highlighting the issues they face, whether that is educating faith leaders, politicians or the LGBTQ community in general.

AKT approach youth homelessness from every angle, including linking young people with support services, finding them accommodation with approved adults, offering beds in London at their Purple Door house, as well as trying to reconcile individuals with families or faith communities where possible.

AKT is officially turning 30 on 6 July 2019. Over its history the charity has helped thousands of young LGBTQ people turn their lives around. If you would like to learn more about the work they do, please check out their website.