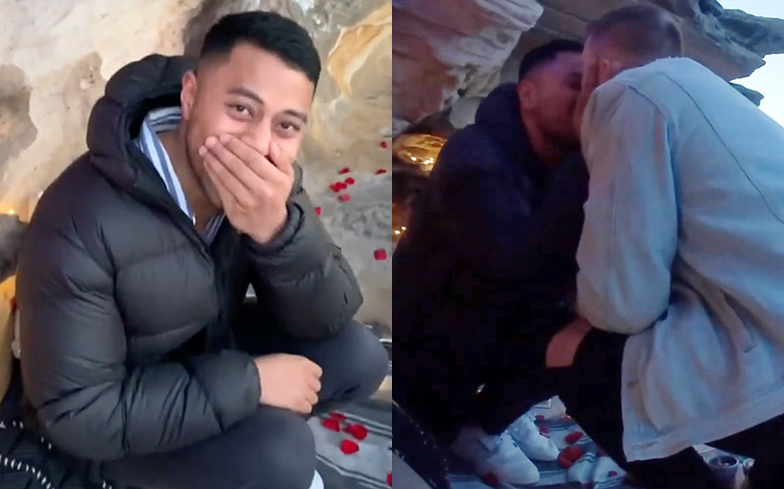 We’re not jealous. Nope. Not at all.

Naisa Lasalosi, a singer who appeared on the 2016 season of The X Factor Australia, recently revealed to his followers that he is engaged to his partner Adam Price after a romantic proposal which was caught on video for the internet to enjoy.

Adam took Naisa to a secluded rock formation that had been covered in rose petals and fairy lights. When Naisa noticed that the location had been set up for someone to have a romantic dinner, Adam replied: “Baby, it’s for us.”

After Naisa accepted the proposal – how could you not? – the couple enjoyed a romantic dinner under the stars.

“Yes! And yes again x1000000. I love you [Adam]. I love everything about you. My heart leaps! Happy is an understatement. Cheers to forever catching the sun and sleeping under the stars together,” Naisa said.

He proposed.. and I said yes ❤️💍 pic.twitter.com/pvmYjKp4Wc

The original video shared on Twitter has received over 7.3 million views, and hundreds of supportive viewers have been sharing their adoration (and sometimes jealousy – we don’t blame them) over the romantic proposal.

“This was the cutest adorablest shit I’ve seen on Twitter for real,” wrote one Twitter user, while another added: “Bro I cannot get over how beautiful this is! It’s so pure and natural. Congratulations guys!”

Naisa revealed that he’s been receiving homophobic abuse since the video went viral, but has been responding in the best way possible by showing them love instead of hate.

“To all the homophobic backlash I’ve received the past few days… I’ve learnt that this is how you kill hate. Periodt. #LoveWins,” he wrote alongside a screenshot of a brief conversation he had with a bigot.

Naisa has even released a song called Home inspired by his relationship with Adam, which you can listen to on Spotify.