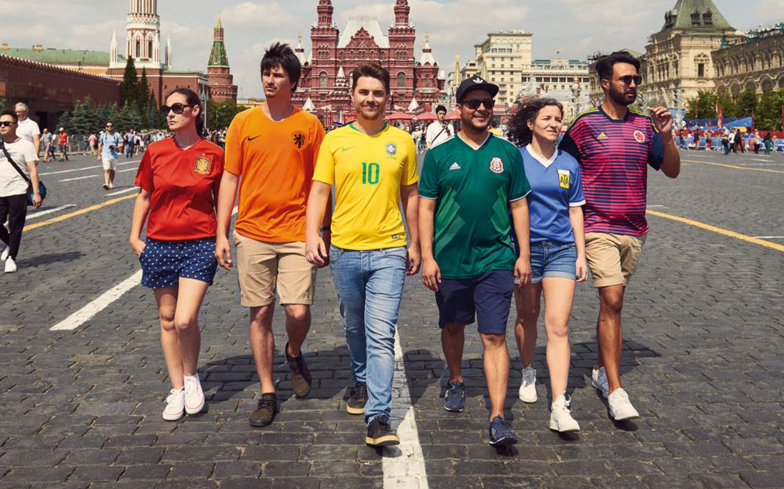 So when it was announced that the country has to host the 2018 World Cup, there were immediately fears for the safety of LGBTQ football fans who would travel there to watch their team.

Authorities warned same-sex couples to not hold hands in public, a French couple were victim to an anti-gay attack as the competition kicked off last month, and an England fan was told to take down his rainbow flag during a match.

However, a group of six LGBTQ activists had a brilliantly genius way of showing their pride in plain sight without facing the wrath of Russian authorities.

The Hidden Flag organisation comprises of four men and two women wearing football shirts in the different colours that makes up Gilbert Baker’s iconic rainbow flag – a symbol for the LGBTQ community.

In Russia it’s illegal to display the LGBT pride flag. So during the #WorldCup these 6 football fans have formed a hidden rainbow flag with their soccer jerseys, to protest Russia’s discriminatory laws in plain sight. #HiddenFlag ✊🏳️‍🌈 pic.twitter.com/I6uvYztGlR

Activists from Spain, The Netherlands, Brazil, Mexico, Argentina and Colombia all donned the football shirts of their home nations to walk around Russia and create a rainbow flag in plain sight, right in front of Russian police, and society.

“They called me and I didn’t even think twice about it. I almost fainted, although I won’t lie I was a little scared,” said Spanish activist Marta Márquez, President of GALEHI Association of LGBT Families.

“This project unites my passions: activism, my love of travel, my family (our daughter is half Russian). I accepted the challenge knowing that it could be complicated.

“I know I did the right thing in being a part of it.”

Eloi Pierozan Junior, a marketing manager from Brazil added: “‘Are you crazy?’ My boyfriend asked me. ‘It’s really dangerous’. ‘I’m not worried about the risk, it’s a project that I really want to be involved in’ I told him. And truthfully, it has been the most emotional project I have ever been taken part in.

Which color is which team? pic.twitter.com/8TxILZ0Kyq

“I come from a very conservative family from a small city in Brazil, so it hasn’t always easy for my sister and I, who is also gay. That is why I have been so excited to form part of our unexpected rainbow.

“I hope it touches the hearts of many people. It’s a call to love.”

If you want to find out more about The Hidden Flag organisation, you can visit their official website here.

As for Russia’s attitudes towards LGBTQ people, a recent poll found that 83% of Russians consider gay sex to be “reprehensible.”

In 2013, Vladimir Putin signed into effect a gay propaganda rule, which banned the promotion of “non-traditional” sexual orientations to minors.