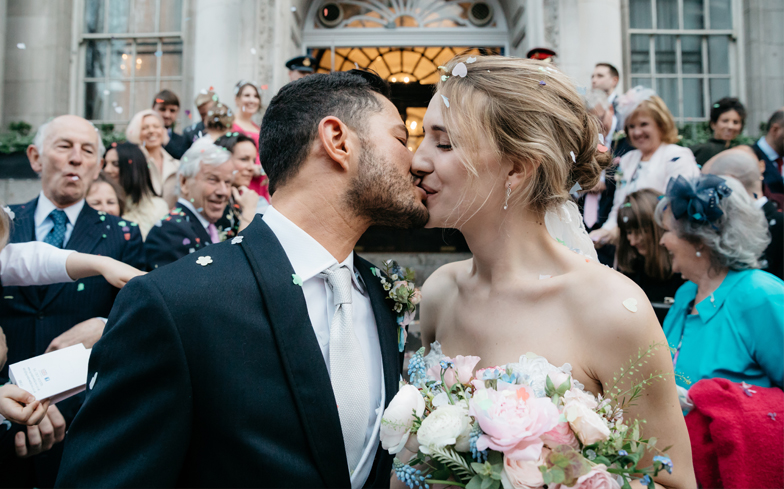 A huge congratulations are in order for newlyweds Jake Graf and Hannah Winterbourne, who tied the knot in London over the weekend.

The actor and Army officer – who both identify as transgender – declared their vows to each other during a romantic wedding, which they described as being “like a Disney movie”.

The couple decided to give a joint interview to mark the occasion with The Sun, and while the copy inside the publication was celebratory about their union, the front page headline has been heavily and rightfully criticised.

The splash leads with the headline ‘Tran and wife’, while it further adds: “Jake who used to be a woman weds Hannah who was a man.”

The front page has been branded “painfully unfunny, pathetic and dated” on social media, with many people calling out The Sun for the seriously ill-judged pun.

Speaking to Gay Times about the way The Sun have reported their wedding, Jake said: “While Hannah and I absolutely love the article, it has been somewhat marred by what can only be described as a sensationalist, clumsy and offensive headline.

“Added to that the red lettering proclaiming that I ‘used to be a woman’, and ‘Hannah used to be a man’, not only categorically untrue but also a dangerous and dismissive grasp of what it means to be transgender, and I would call this a rather large error on the part of The Sun.

“We had been approached by several of the larger papers with a view to covering our wedding, but they were papers with a terrible track record of transphobic ‘reporting’, so we immediately said no.

“We felt that The Sun who not only regularly features trans writer Paris Lees, but who has also sensitively covered several recent trans stories would be well positioned to write a positive and broadly read piece.

“It was important to us to attempt to widen people’s understanding of trans lives and experiences and we felt that The Sun with its large readership would help to achieve that. Hopefully a tacky and ill advised headline hasn’t stopped that from being the case.” Jake added: “I think that any headline this garish and ill conceived will have some negative ramifications, and could of course lead some people to assume that we’ve just decided we didn’t ‘like’ our birth gender.

“I’ve known since I was about 3 that I was a man and Hannah has always known she was a woman and our transitions were simply aligning our minds with our bodies.

“Hopefully upon reading a little more about us the Sun readers will see that we are like any other couple who have just wed.”

Jake is an actor, writer and director, and back in 2015 was invited to The White House to take part in a Q&A with Barack Obama.

They will now move into Army married quarters near Hannah’s barracks to start the rest of their lives together.

“We’re just the same as everyone else, with our flaws and ups and downs — but a little bit different,” Jake said.

Hannah added: “We want kids sooner rather than later. I’ve definitely got broody since turning 30. A lot of my friends have got kids now. We’ll go for surrogacy in the first instance and see how it goes.”