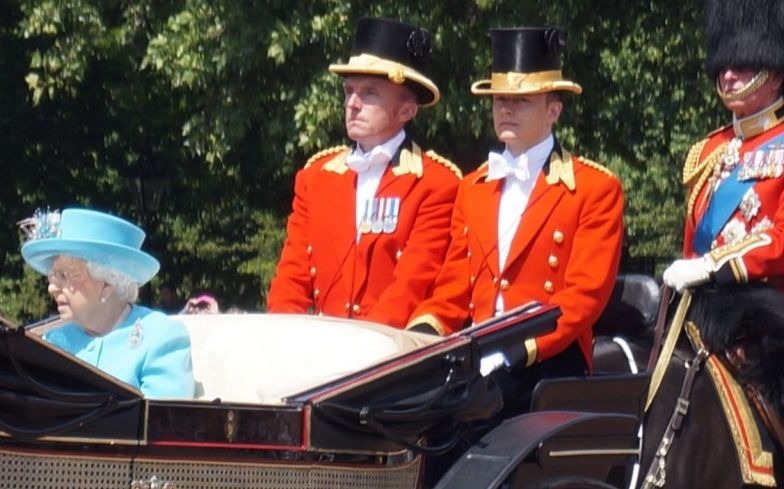 His appearance was at the Trooping of the Colour’s for the Queen’s birthday.

The Queen’s new openly gay personal footman, Ollie Roberts, made his first public appearance yesterday. During the Trooping of the Colours, Ollie was sat behind the Queen on her carriage.

Ollie is 21, from Wales, and has served with the armed services in the past.

The Trooping of the Colours is an annual event that celebrates the Queen’s birthday. During the ceremony, the Queen goes down The Mall in a royal procession. She then inspects her troops of the Household Division, both foot soldiers and cavalry, before a regiment of foot soldiers is selected to troop its colour through the other ranks.

Following this, the entire Household Division then marches past the Queen, giving a salute as they do so. The Queen then returns to Buckingham Palace to watch a further march, before leading the Royal Family out onto the Royal Balcony to watch an RAF flypast.

Last year, during the State Opening of Parliament, part of the Queen’s speech included a pledge to fight against anti-LGBTQ discrimination. In the speech – which was penned by the Conservatives – she said: “My government will make further progress to tackle the gender pay gap and discrimination against people on the basis of their race, faith, gender, disability or sexual orientation.”

And during 2017, the Queen also revealed that her favourite song was gay anthem Dancing Queen. According to a friend of radio and former Top Gear presenter Chris Evans, The Queen said of the song: “I always try to dance when this song comes on, because I am the Queen, and I like to dance.”