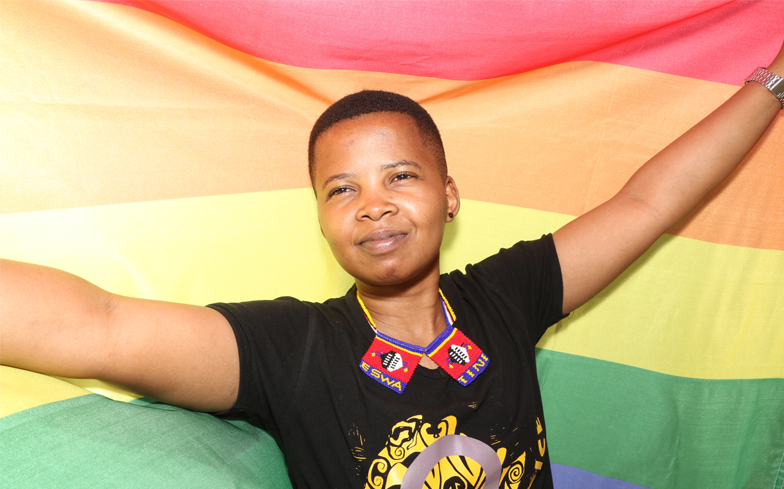 The first ever Pride march in the history of eSwatini just finished.

The community and their allies painted the streets of this country rainbow, with a beautiful, colourful parade that was literally exploding with joy. At certain moments during the parade, the infectious joy of this community was so intense, it was difficult to hold back the tears.

We were loud, proud and dignified. Nobody came to hurl hate, abuse (or worse) at us, as had been feared. Instead, this was a moment of community and personal empowerment. A powerful boost to so many who have had to hide in the shadows, but who today experienced the giddy excitement of visibility and deep community.

Rock of Hope is the organiser of the event. Their Communications Manager, Melusi Simelane, has been the driving force of the audacious and ambitious idea to hold the first ever Pride here. This is a small country, an absolute monarchy that makes same-sex love illegal and is not often on the radar of the international community and media. But none of that stopped Melusi and his colleagues. We salute them.

The success of the event will also be an inspiration to LGBTQ groups across this continent. It will empower other African movements to defy those who wish to silence LGBTQ people and embolden them to come out on the streets in pride and courage.

Our thoughts are especially with the Ugandan LGBTQ community whose brave efforts to hold Pride have been brutally crushed for the last two years. During eSwatini Pride, I was able to pass on greetings from All Out’s partners in Uganda to the people here in Mbabane. We loved Rock of Hope’s determined plans for Pride and All Out members from around the world enabled this event to happen by making small donations to fund it.

As a speaker at the eSwatini Pride festival this past weekend, I was able to bring a message of love and solidarity to the participants from All Out supporters from around the world. They were also thanked publicly by the organisers and should feel a deep sense of pride for this powerful and impactful display of global solidarity.

But the biggest shout out goes to the LGBTQ community of eSwatini. You have shown the world that love always wins. Our pride in you is overwhelming.

Matt Beard is the Executive Director of All Out.