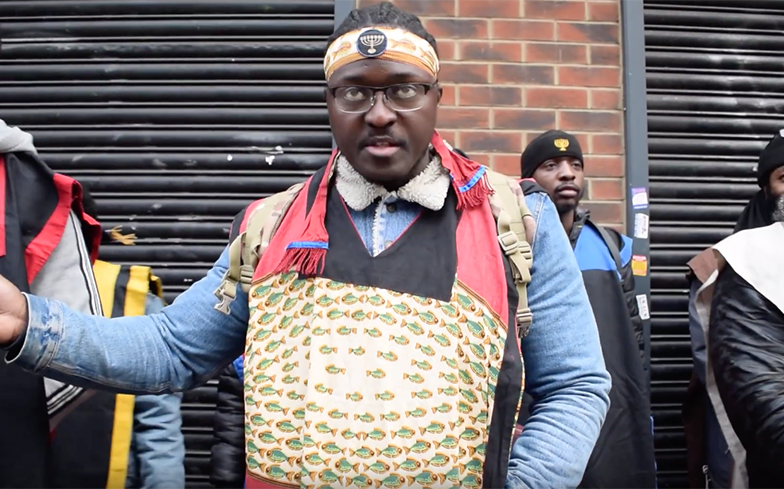 The footage is harrowing.

Terrifying footage has emerged of a religious hate group threatening violence against women and queer people.

The Church of Yahawashi, an extremist sect of Black Hebrew Israelites, uploaded a video earlier this week on YouTube of their members inciting racial, misogynistic and homophobic violence in the streets of Dalston in East London.

In the video, one of their preachers addresses the camera and disturbingly says, “We just came out of a restaurant and we had two f****ts in there that we had to keep eyes on. We don’t like f****ts.

“But some brothers reserve their comment, because they want to be doing the slaying. Really, they want to put a sword to you.” Other members of the group can be heard agreeing with him, shouting “that’s right!” and “preach!”

Later, the minister launches a scathing attack against women, saying they “have no regard for our authority, but we ain’t gonna show no regard for them when the Lord gives us the power to start chopping their fucking heads off”.

They have reportedly been holding regular preaching sessions in Brixton, Southwark and Dalston for over a year.

Hope Not Hate, an anti-hatred group based in London, said they have been monitoring The Church of Yahawashi for “some time” and have called on authorities to take action at their “extreme and violent homophobia”.

“The Church of Yahawashi’s racism and violent threats are extreme and shocking,” they wrote on their website.

“The group displays almost every conceivable form of hatred – homophobia, misogyny, religious bigotry and racism – and much of their preaching is in clear breach of laws against hate speech and incitement to violence.”

The Church of Yahawashi is reportedly “obsessed with the idea of an impending judgement day” and they believe that the group members themselves will be the ones to “unleash” the violence.

“It seems clear that the group’s preaching goes well beyond the limits of acceptable religious expression, and constitutes clear hate speech and incitement to racial and religious hatred,” added Hope Not Hate.

“Hope Not Hate believe that this group pose a serious and violent risk and are calling on the police to take action if they are found to have broken the law.”