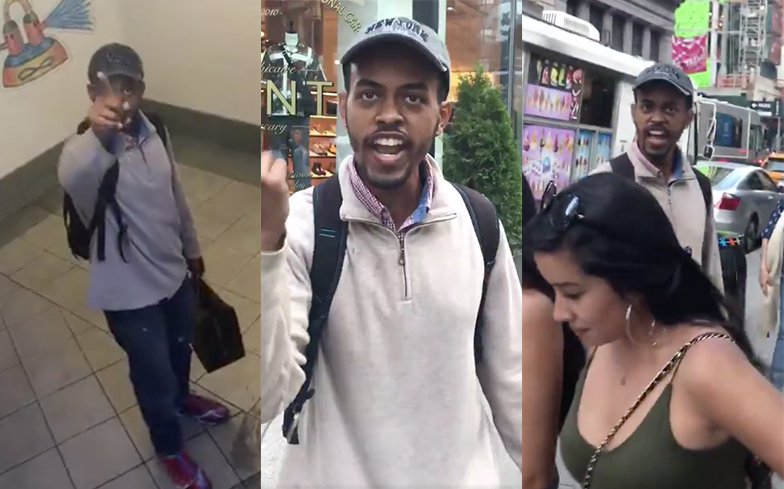 “You’re desecrating the name of God. You will be murdered!”

Harrowing footage has emerged of a gay man being harassed and told he’ll be murdered for his sexuality.

Adam Eli, a community organizer in New York City, was followed out of a Manhattan subway station by an unidentified homophobe, who took issue with his pink yippah, purse and gay pride patch on his jeans.

“You’re desecrating the name of God,” he said as he approached Eli. “Any man that lays with another man is an abomination. Stay in the closet! Make sure your closet is in another closet! You will be murdered! Take the kippah off.”

Eli refused and told the man: “No! This is my life and my city, I don’t have to take my kippah off.”

The footage immediately went viral on social media, amassing over one million views on Twitter. Eli said in an interview with PIX 11: “I’m sort of assuming they read that I was gay cause of the purse and also I have a patch on my butt.”

“I’m cisgender, white, I have a social media platform I have resources and that’s the type of violence that I’m getting.

“If that’s the type of violence that one of the most privileged members of our community is getting, can you imagine what it’s like every day in the subway to be a trans person or a gender non-conforming person or a queer person of color?”

In a series of tweets, Eli explained his reasons for uploading the video. He said he spent the “first 18 years” of his life being told that he couldn’t be gay and Jewish, but today, he finally loves his Jewish identity and nobody is taking that away from him.

“In this moment I was able to stand up to my attacker NOT bc I’m brave but bc I’m a white resourced man in a heavily trafficked place,” he wrote. “We know what happens when a white man attacks a black trans women.

“To my fellow cis white gays who generally ‘pass’ for being hetro in public: this is whats out there. Most of the time we can get on the subway, go for a run or go on a date in peace. That does not mean our struggle for queer liberation is over.

“Racism, transphobia, xenophobia, islamophobia, anti semitism and ableism hold hands. Our ancestors taught us none of us are safe until all of us are safe. Queer culture is not going to Equinox and getting brunch.”

He ended his tweets on the following statement: “Queer culture is about fighting for ur community.”

New York City mayor Bill de Blasio shared the video and praised Eli for the “courage to confront homophobia and tell a story like this.” He added: “I’m sorry you had to go through this, Adam. But we’re proud of how you responded.

“There’s no place for hate in this city.”