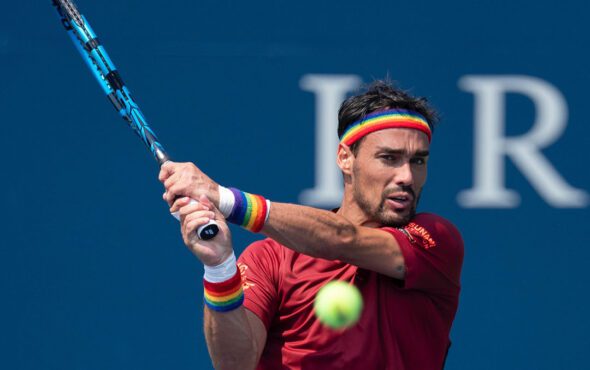 Italian tennis player Fabio Fognini wore rainbow-coloured sweat gear for his first return to the court since he yelled an anti-LGBTQ+ slur at the Tokyo Olympics.

Fognini took to the court for his first-round match at the ATP (Association of Tennis Professionals) 1000 event in Toronto on Monday (9 August). He took to the court wearing a rainbow-striped headband and matching sweatbands on both wrists.

The world number 36 was victorious in a three-set game against Germany’s Jan-Lennard Struff just weeks after his dramatic and profanity-laden third-round loss at the Tokyo Olympics.

The apologetic player posted images of himself on the court wearing the rainbow gear on both Instagram and Twitter, accompanied by the caption “#loveforall 🌈’.

During the Olympic loss to Russian star Daniil Medvedev, a frustrated Fognini was heard using an offensive Italian slur. He also slammed his racket on the court during multiple points of the match.

Shortly after the tournament, Fognini took to his Instagram stories and apologised for using the homophobic slur.

“In today’s match I used a really stupid expression towards myself,” he said. “Obviously I didn’t want to offend anyone’s sensibilities. I love the LGBT community and I apologized for the nonsense that came out of me.”

He went on to say that the 37°C heat “affected his head” which resulted in him using the offensive word.

Fabio Fognini, who used homophobic slurs during his loss at the #Olympics, blamed it on the heat in this Instagram story post. pic.twitter.com/rKn1SrS7cy

This isn’t the first time that the tennis player has been called out for inappropriate language. In 2017, Fognini was kicked out of the US Open after he hurled insults to the chair umpire and faced a further two Grand Slam ban.