Teen viciously beaten and called a “f***ing lesbian” over £10 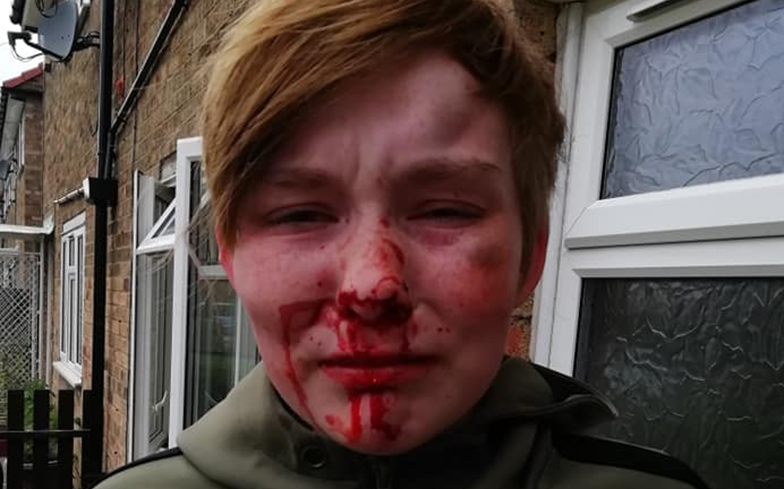 “It is not okay, regardless if she is gay or not, to do this to an 18-year-old. It is absolutely disgusting.”

An 18-year-old was attacked and called a “fucking lesbian” after she got into a row with two ‘friends’ over £10.

Ellie-Mae Mulholland, from Walsall Garth, Hull, was on her way home on Monday afternoon (8 July) when she approached a friend who owed her money, according to her sister Stevie-Leigh Ansell.

The girl – who hasn’t been identified – then told Mulholland that she “never had” the money, and then proceeded to “beat her black and blue” with the help of another friend.

“Because she is gay they called her a ‘f***ing lesbian,’ (and said) ‘you and your girlfriend are going to get it ten times worse next time,'” Ansell told HullLive.

Ansell also shared shocking images of Mulholland’s bloody face on her Facebook, saying the attackers left her with a “busted nose, two black eyes and two big lumps on her head.”

She continued: “Just by looking at her face they have had a really good go at her. I feel I cannot let this happen to my sister because she is gay. I just feel really helpless.

“It is not okay, regardless if she is gay or not, to do this to an 18-year-old. It is absolutely disgusting.”

Detective Chief Inspector Ali Sweeting said: “The initial report we received was in relation to a common assault and we have since seen media reports that this was believed to have had a homophobic motive.

“We are in the early stages of our investigations and will be speaking to the victim and to other parties involved to establish the full circumstances of the incident.

“If it is established that there was a homophobic motive we will be treating this appropriately. We deal with all hate incidents and crimes thoroughly and do not expect the people of our communities to have to suffer from the intolerance of others.”