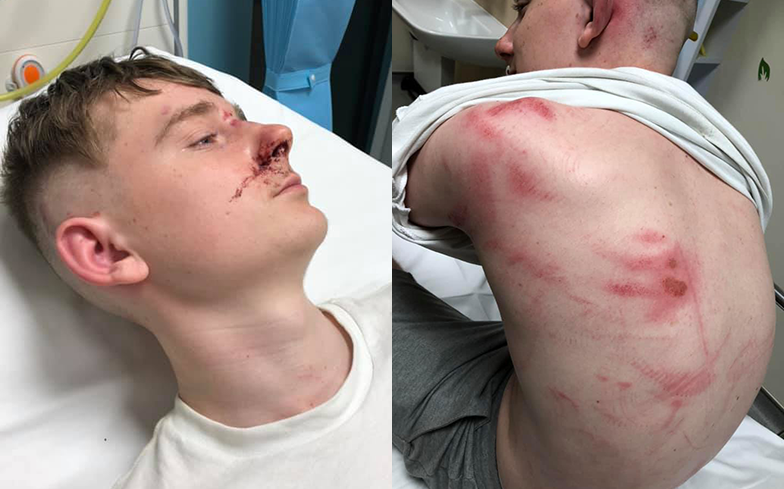 “There was 10 of them against one, all he could do was curl up in to a ball to try to protect himself.”

A 17-year-old boy was hospitalised after defending his friend from a group of anti-LGBTQ thugs.

Jack Roberts – from Thrybergh in Rotherham – was with his girlfriend and four others when a group of ten men started launching homophobic remarks at them. After he gained their attention, Jack was punched, kicked and stamped on.

One of the attackers reportedly used a knuckle duster, which left Jack with several marks on his body and face. He was later rushed to hospital and his family were alerted by the police.

Authorities took statements from his friends and others who witnessed the attack.

Jack’s mother, Jodie, uploaded photos of his injuries on Facebook, alongside the caption: “To the absolute bastards who jumped our boy last night, I bet your parents are so proud of you! Jack wouldn’t hurt anyone.”

She later revealed that Jack had only known the boy the abuse was directed at for about two hours, but he defended him because he knows “right from wrong”, adding: “I am so proud of him for trying to protect someone else.”

Jodie continued: “Jack isn’t a fighter, he isn’t like that, he just said to the gang ‘don’t say that’ when they started dishing out homophobic comments to one of the boys with him and his girlfriend.

“He said that he realised he had made a mistake when they then turned on him and before he knew it he was being kicked down the field. They were kicking, punching and stamping on him while his girlfriend was trying to get then off him.”

She said Jack resulted to ‘curling up in a ball’ because he had “no chance” against ten people.

“There was a knuckle duster used during the attack, which is bad enough but I am just so grateful that they weren’t carrying knives because the outcome could have been so much worse,” she added.

“Jack is such a polite young lad who would do anything for anyone. He did nothing to deserve this and I just hope the police find who was involved.”

If you have any information about the attack, please call South Yorkshire Police on 101.