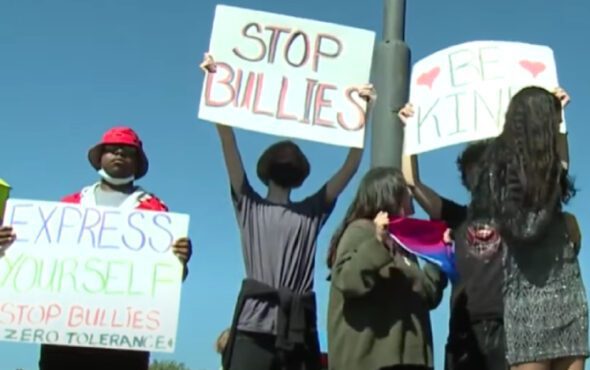 Students staged a school walkout in support of a gay student who has faced alleged bullying and harassment over his sexuality.

The protest took place on 3 October and saw over 100 students exit class early to stand outside the school with signs and LGBTQ+ flags.

Parents and students alike told The Kansas City Star that staff at Lee’s Summit High School in Kansas City were not providing enough support to Danny Lillis, a gay senior.

This resulted in a petition calling for “LGBTQ+ safety” at the institution garnering almost 2,700 signatures by the day of the walkout.

Lillis says that he and his friends have been targeted since the start of the academic year, something that has ranged from hateful remarks to food being thrown at them.

The student said he has reported the incidents at least four times, adding he was “crying, saying ‘I don’t feel safe’ repeatedly. And nothing changed.”

“We decided to do the walk out today to basically show movement towards our school and administration for the lack of action toward these repeated and multiple events that have been happening to me and my friends,” he told local outlet KSHB.

“I’m terrified to step another foot in that school. To walk into a building where someone had just punched my friend and broke her nose due to this whole situation.”

Signs held by students during the walkout said positive messages such as “be kind” and “stop bullies” in response to Lillis’ treatment.

“They have given them a hard time for Danny being gay, for him wearing makeup to school, for him expressing himself,” Melanie Davies, the mother of one of his friends, told The Kansas City Star.

“Every single time that this happened, our kids have gone to student administration and reported it,” Davies added. “There is supposed to be a zero-tolerance policy for bullying, but nobody is doing anything about [it]. They haven’t gotten the help that they needed.”

The walkout was organised after the alleged bullying escalated into a physical fight on 29 September.

“The same group of kids started in on them again, and my daughter just had enough. She ran up the stairs after one of the boys and yelled at him to not talk to them like that, to not say those things,” Davies explained. She added: “They turned around and he was walking in front of them. My daughter tried to get around him. But their shoulders hit, and then he shoved her. So she shoved him back, and he punched her right in the face.

“No teachers were around. Students broke it up.”

In a statement to The Kansas City Star, school district spokesperson Katy Bergen said that “all forms of bullying are prohibited in LSR7. We investigate all complaints of bullying that we receive.”

Bergen did not give any specifics relating to the students, but added: “Everyone in the Lee’s Summit R-7 School District community deserves to feel safe and welcome. Harassment or discrimination in LSR7 is strictly prohibited.

“Although laws protecting students’ privacy prevents us from discussing the specifics of this incident, we can share that school and district administrators are conducting an investigation and taking action to ensure the safety of all students and staff. “District administrators will follow Board of Education policies and procedures as we determine next steps. In LSR7, it is a top priority to ensure an inclusive culture where our students, staff members and families are valued and treated with dignity.”

According to Davies, all of the students involved in the physical altercation received an out-of-school suspension.

The aforementioned petition calls for the students targeted by the bullies to have their suspension removed from their records as it is not fair to give them all the same punishment.

“This is on the school. They should have taken care of this a long time ago when it was first brought to their attention,” Davies added. “I don’t condone my daughter using violence at school or anywhere else. But I also do know these kids were pushed to a point that they felt like if nobody else was going to stick up for them, they had to stick up for themselves.”