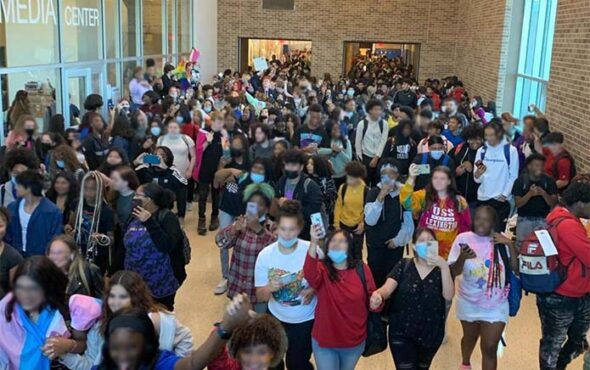 Dozens of students walked out of class in support of a trans student who was banned from using the girls’ changing room.

In a lengthy Instagram post on 22 September, Kendall Tinoco, a Temple High School student, alleged that she “couldn’t use the locker room because there were ‘actual girls’ in there.”

“I’ve been using the females restroom since the 7th grade,” she wrote in the post that has now gone viral.

Tinoco explained that she had documents which showed her right to use the facilities she needs at the school in Texas when she was allegedly confronted by a staff member outside the school’s changing rooms.

Despite this, the student claims the teacher told her to change in a closet alongside a male.

The 16-year-old went on to share that the school failed to support her when she made them aware of the incident, which is why she took to Instagram to draw attention to the situation.

Tinoco’s post went on to highlight that current policies from the US Department of Education (DOE) state that trans discrimination is illegal as a result of the Supreme Court decision in Bostock v. Clayton County.

“I hope y’all understand how embarrassing and how discriminatory this situation is,” she continued. “Please stand with me and make a change for us and the future of LGBTQ people.”

Her fellow students listened to what Tinoco had to say and on 29 September they staged a walkout during the third period of their school day.

According to news outlet KCEN, students waved Pride flags, chanted and defied teacher’s orders telling them to return to class.

“I just wanted to help make a change,” Akayla Shahan, a student at the school, said to KCEN. “Do whatever I could.”

Another student at the school, Stevie Williams, added: “We said what we had to say. We will not be silenced.”

Christine Parks, a spokesperson for the school district, explained to the news outlet that Tinoco and her family had met with faculty members to discuss transgender guidelines.

Currently, these state “gender-neutral” facilities are provided to trans students “in order to allow privacy for all students.”

In addition, the school dress code must be followed and these students must use their “legal surname”.

“Students have the right to peaceful protests,” a spokesperson said. “However, if such activities result in student behaviors such as skipping class or leaving a classroom without permission, then these Student Code of Conduct violations will result in consequences as outlined in the Code of Conduct.”

Tinoco said she was “really proud” of the support she received from fellow students during the protest.