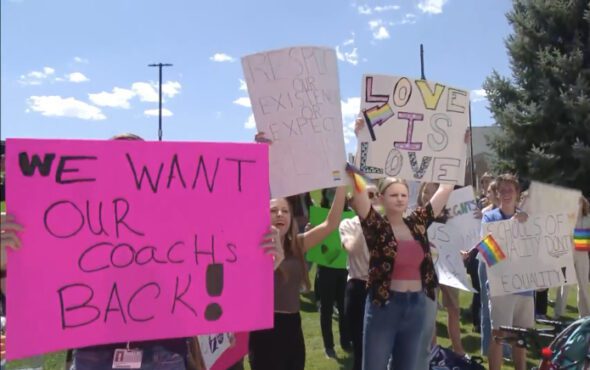 Students walked out of class in protest of their school allegedly forcing a volleyball coach to quit for being gay.

He stated that he was called into a meeting with the campus pastor and athletic director, where he was told to “become a child of God” or be forced to leave his job as head coach of girl’s volleyball at the school.

After persistently being asked about any “changes in lifestyle that were life-changing”, the pastor and athletic director accused Tonga of being gay based on social media posts they had seen – something which they felt went against the school’s values and beliefs.

Now, students at the school have shown their support to the volleyball coach by walking out of class on Tuesday (24 August) and demanding significant change to the school’s policies and culture.

“Reading the statements from Coach Inoke broke my heart to hear that they called him a danger to the school,” said Lucy Sarkissian, a 16-year-old Valor Christian High School student.

“For every queer teen sitting at this school right now, to hear that they are a danger, breaks their heart.”

Sarkissian was the student who organised the walkout, stating that the school needs to be more accepting of staff and students.

She added: “There’s some concrete changes we would like to see made, and number one is going to be not firing teachers based off of their sexuality.

“Additionally, we would like to see that students are able to be more open about their sexuality without fear of being reprimanded by the deans.”

Valor Christian High School issued a statement about Tonga’s situation, confirming that he had been spoken to about a Facebook post by school officials.

“Valor’s campus pastor and athletic director initiated a conversation with Coach Inoke to explore this matter further,” the statement read. “Following this discussion, Coach Inoke provided a statement to Valor in which he concluded that he does not support Valor’s beliefs and he requested a separation from Valor.”

They claimed that the post made them determine he held views that may not align with the school’s, though did not acknowledge this allegedly being because of his sexuality.

“Although Coach Inoke has misrepresented many aspects of this matter, Valor appreciates the contributions he has made to the student athletes in our volleyball program, and we wish him the very best in his future endeavors,” the statement continued.

Valor Christian students walking out of class today after a volleyball coach says he was forced to choose between being gay or being an employee. The story tonight @CBSDenver at 5 and 6. pic.twitter.com/LooTXXVzW5

Sarkissian and her fellow students believe the school’s actions conflict with the values they believe Tonga is not in support of.

During their protest, they stood outside the school holding signs saying “love is love,” “respect our existence or expect resistance,” and “schools of quality don’t fear equality”.