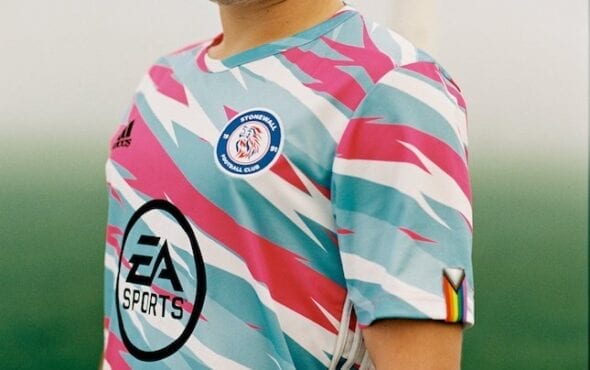 Stonewall FC have unveiled three new team kits to celebrate solidarity with the LGBTQ+ community in and outside of the sports industry.

We all know LGBTQ+ representation in football has been a touchy subject, but now the industry is driving inclusivity and visibility in a fresh campaign.

Partnering with Adidas, Stonewall FC announced the launch of their brand new kits last week (December 8) which were debuted by the club on Saturday (December 12).

Stonewall FC have stated the kits are central to a “bigger purpose” which involves encouraging LGBTQ+ representation and a wider commitment to the queer community.

The three new shirts will all include LGBTQ+ sewn-in details to distinguish their appearances.

The left sleeve of each shirt will include a newly stitched modern LGBTQ+ tag while the right sleeve will feature “Kick It Out” text as a message of support in the fight against racism and discrimination in football.

Kick It Out is an equality and inclusion organisation dedicated to actively combat the presence of discrimination on the field and in the sporting community.

Within the sporting community, there is still a lack of representation for trans individuals and sportspeople. Stonewall FC are addressing this with their Unity Team kit which is a vocalised celebration and acknowledgement of the trans community.

The kit will include trans flag colours across the kit in an eye-catching contemporary camo style.

The club said their use of the colours is an active choice to “make it clear that we stand with our trans and gender non-confirming family in the fight against transphobia.”

Stonewall FC have also partnered with LGBT+ charity Mermaids to create better pathways into football for trans and gender non-confirming young people of the future.

Following the release of the shirts, Stonewall FC offered a statement emphasising how it hopes their new kits will make a difference in the sport: “Support like this is invaluable in helping to generate awareness of us as a club and will in turn, help in our efforts to broaden LGBT+ participation within the game.”

Released in collaboration with club partners @adidasUK and @EASPORTSFIFA, Stonewall FC are delighted to announce the launch of our kits for the 2020/21 season! pic.twitter.com/LuCee26oKQ