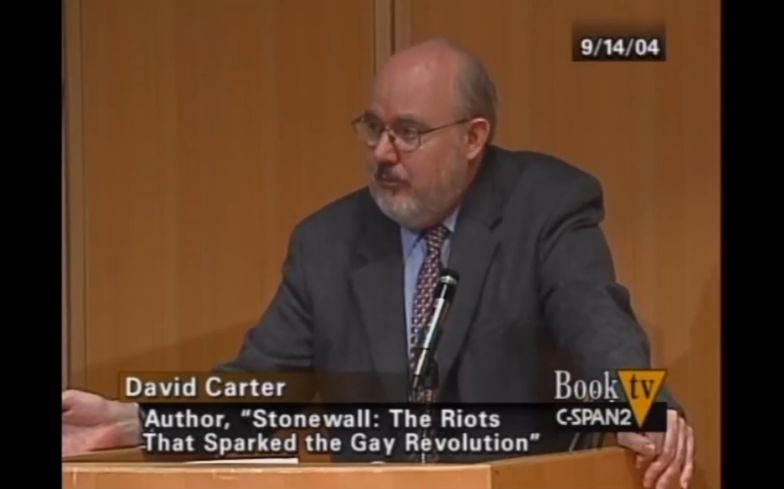 David Carter was the author of Stonewall: The Riots That Sparked the Gay Revolution.

The gay historian and author David Carter has died in his apartment in New York City’s Greenwich Village, aged 67. It’s believed that his cause of death was a heart attack.

The Washington Blade reports that Carter died on 1 May, but his death was only recently announced. He rose to prominence in 2004 with his book Stonewall: The Riots That Sparked the Gay Revolution.

The book received positive reviews, and was adapted into the documentary Stonewall Uprising, which won a Peabody Award. The book wasn’t Carter’s only contribution to the history of Stonewall, as he also worked with the National Park Service to have the Stonewall Inn and its adjacent land designated as a national monument and historic landmark.

David Carter became active in LGBTQ advocacy in the 1970s when he was a graduate student at the University of Wisconsin-Madison. He helped to co-found an organisation to successfully fight against a proposed repeal of Madison’s non-discrimination laws.

He also unsuccessfully fought against the repeal of similar laws in the Miami-Dade county, although they were reinstated several years later.

His other writing credits include Spontaneous Mind: Selected Interviews 1958-1996, which featured interviews with the gay poet Allen Ginsburg, as well as other young-adult books focusing on LGBTQ history. At the time of his death, he was working on a biography of the LGBTQ activist Frank Kameny.

Frank is regarded as one of the most significant figures in America’s LGBTQ history and rose to prominence after he was fired from his job as an astronomer for the US Army in 1957.

Carter was also the senior medical editor at Saatchi & Saatchi and had contributed LGBTQ pieces to outlets like the BBC, CNN, Time magazine, the Washington Blade and the Gay and Lesbian Review.

A longtime friend, Eric Danzer, told the Washington Blade: “In his medical editing and his LGBT history work, he showed a passion for accuracy.

“In his LGBT history work, he was painstakingly methodical in assembling the facts, passionate about following them wherever they led to make sure that our history is recorded accurately.

“He had great respect for the subjects of his work and felt a great responsibility to preserve the legacy of subjects whose contributions were generally not well known, but should be, like Frank Kameny.”

David is survived by his brother, William C. Carter, sister-in-law Lynn, as well as three nieces and five great nieces and nephews.

He will be buried in his hometown of Jesup, Georgia and memorial services will be held in Georgia and New York at later dates.