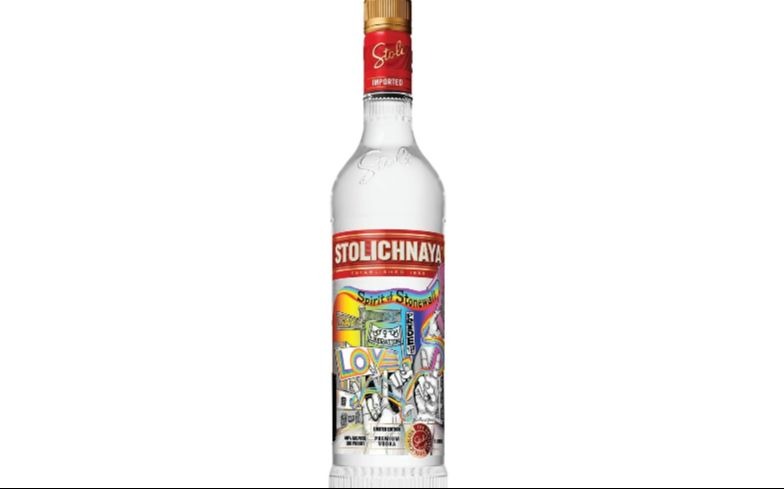 Funds raised will be donated to the Stonewall Inn Gives Back Initiative.

Stoli Vodka has unveiled a limited edition bottle that marks the 50th anniversary of the Stonewall riots. The design was made by LGBTQ artist Lisa Marie Thalhammer.

Funds from the bottole will be donated to the Stonewall In Gives Back Initiative, which fights to end anti-LGBTQ attitudes in both America and abroad.

Stacy Lentz, the CEO and co-founder of the initiative, said: “We are thrilled that Stoli is continuing its long-standing tradition of supporting the LGBTQ community by working with the Stonewall Inn Gives Back Initiative.

“These much-needed funds will help continue the Stonewall legacy especially in places where equality has been slow to arrive, and full legal protections are not in place.”

Patrik Gallineaux, the LGBTQ National Brand Manager and Ambassador for Stoli Vodka, said: “Pride is all about sticking up for something you believe in – just as the brave patrons of the Stonewall Inn did 50 years ago – that all good people deserve to love freely and stand proudly in the bright spotlight of the beauty of their diversity without the expectation that one needs to hide in the shadows, or in the closet.

“Stoli celebrates the legacy of our gay bars, such as Stonewall, as the original community centers and safe spaces. It is a privilege to utilize our bottle as a platform for purposeful visibility and education via our second LGBTQ tribute bottle, the Stoli ‘Spirit of Stonewall’ limited edition.”

Several other companies are now promoting Pride ranges as Pride month draws closer. Converse announced for the first time their Pride range would include a design modeled after the transgender flag, and as customisation options are available other pride flags like the bisexual or lesbian ones can also be made.

DC Brau also announced it would be selling 28,000 cans featuring a design of the trailblazing activist Marsha P. Johnson. Proceeds from the sales of the cans will be donated to SMYAL, a charity that helps LGBTQ youth, and The Blade Foundation, which helps fund LGBTQ journalism.

Bud Light also revealed their Pride bottles, with proceeds from the sales of these going toward GLAAD.