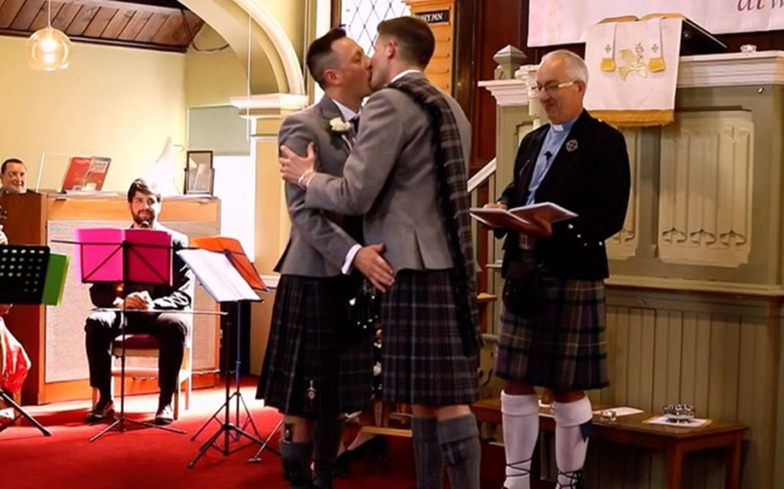 The Sunday show is breaking away from the archaic production script and appealing to a more modern audience.

Songs of Praise first hit the British public’s screens in 1961, but during its 58-year run, not once has the show featured the marriage of a same-sex couple.

However, this week’s Sunday afternoon show, aptly named God’s Own Country, will include the marriage of Jamie Wallace and Ian McDowall at the Rutherglen United Reformed Church in Glasgow.

Same-sex marriage has been legal in Scotland since 2014, but whether churches allow to play host to same-sex marriages is down to the vote of individual congregations.

The United Reformed Church in Glasgow is one of a handful religious denominations in the UK that allows same-sex marriage.

In conversation with Glasgow’s Sunday Post, Wallace explains “as a committed Christian, being able to marry the man I love with all my heart and soul, before God, in the church I love, with my family, friends and the congregation around us, is something I’ve dreamed of.”

This productional change does not come as a surprise for the BBC One show. In 2017, the long running programme introduced Katherine Jenkins and JB Bill, one of the faces of the boy band JLS, as one of the many presenters of the show.

Yet this movement towards modernity has come with some backlash from the less liberal minded viewers, but this does not phase Reverend Kate Bottley.

Bottley, who is the only ordained presenter on the show, told the Telegraph: “I don’t expect people to fall on their knees in front of Songs of Praise. But we do the big stuff – live, love, death and trauma – we are definitely not afraid of controversy.”

The God’s Own Country episode will be airing on 25 August at 1:15pm.