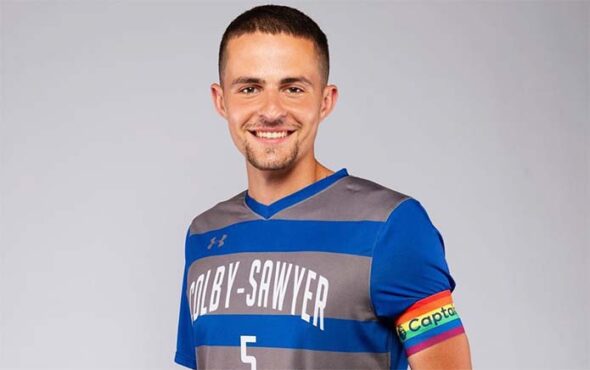 An American soccer team rallied around a gay player after he was subjected to homophobic abuse during a game.

Couper Gunn, who is a defender and team captain on the Colby-Sawyer College men’s soccer team, the Chargers, was competing in a match against the Rivier University Raiders when the incident took place.

Right before halftime during the 22 September game, one of the opposing team’s players approached Gunn, who was wearing a rainbow-coloured armband.

In the immediate aftermath of the verbal assault, Gunn went to the locker room during halftime and burst into tears.

“I was upset I’d been called that, but I was more upset because I was thinking about all the queer kids who that kid comes into contact with every day,” the player told Outsports. “He perpetuates that, even if he didn’t mean it, using the ‘F’ word.

“And I was just so sad that someone like that exists, who would use that language. I was present with how unsafe and how unwelcome that made me feel for a few minutes.”

When the game resumed, Gunn’s teammates and coaches immediately stepped up to show their support for him.

Bob Reasso, the team’s coach for the last three months, told him: “Look at me. “You’re a very brave man. You’re a strong man.”

Lucas Boetsch, the co-captain of the Chargers, said: “The first real emotion was just fury at the audacity of someone using a homophobic slur like that. It was outrageous to us.”

Despite the game being at a 0-0 score prior to the incident, when it recommenced after halftime Gunn’s team quickly kicked into gear.

Just 10 minutes into the second half, Finn Husband scored a goal with the help of Jadon Baros, which was followed by another from Conor McKearin in the game’s 69th minute.

“When my teammates came in, immediately to start the second half, they brought the energy and made it easier for me to get my head back into the game,” Gunn said.

Just 15 minutes after McKearin’s goal, the Chargers took a 5-0 lead against the Raiders – which was all the more embarrassing as they were on their home pitch in front of fellow students and friends.

In the two shots they attempted in the game’s second half, the Raiders missed both – giving the Chargers their first win of the season in what was Gunn’s fifth game of his senior year.

“I was very proud of Couper in the way he responded,” Boetsch added. “You could tell he was visibly upset. He had a couple words with the opponent, and then he spoke to the referee afterward. And then the game went on. But the part I’m most proud of is that he didn’t retaliate.

“He had the opportunity to lay the kid out, but he didn’t. He let the game talk.”

In a statement to Outsports, Rivier athletic director Joanne Merrill said: “Rivier takes any negative speech or actions seriously and is in all ways against them.

“We have taken this incident very seriously and have handled it in a way we view as appropriate.

“We regret that it happened and it in no way reflects what we are about and what we try to model.”