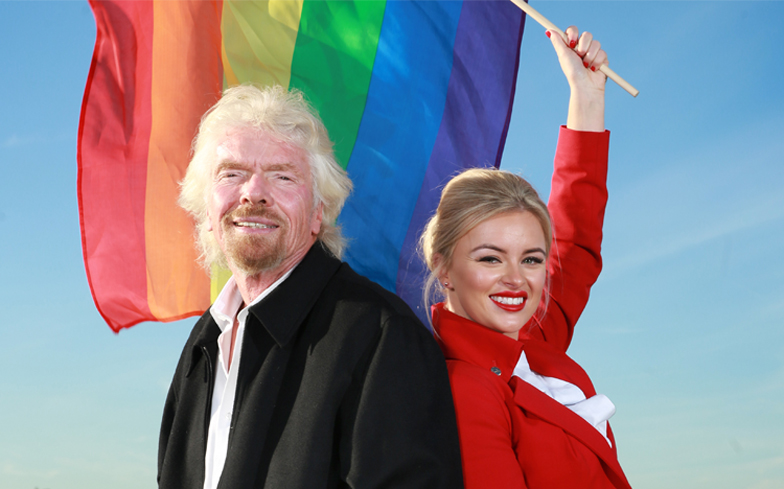 The Virgin Group founder wants businesses to use their influence over anti-LGBTQ governments.

Sir Richard Branson has urged businesses doing business in countries with anti-LGBTQ laws to use their influence to push for equal rights for the LGBTQ community.

The blog post was written in response to Brunei enacting a strict form of Sharia law which, among other things, will see gay people stoned to death.

There has been a massive international backlash against the move, with Hollywood star George Clooney urging people to boycott Brunei-owned hotels like the Dorchester. His campaign was backed by figures like Sir Elton John and Dua Lipa, and last month the TV Choice Awards announced it wouldn’t hold its awards ceremony at the hotel over the new laws.

In a blog post on Virgin.com, Sir Richard wrote: “Much has been written and said over the past few weeks about the horrific decision by Brunei’s ruler, Sultan Hassanal Bolkiah, to introduce a harsh form of Sharia law which includes the death penalty by stoning for same sex-relations, among other draconian forms of corporal punishment.”

He added how other countries have the death penalty for being gay, and noted how action hadn’t been taken against them. “But the debate about Brunei also raises the question of priorities.

“Scores of countries continue to marginalise, criminalise and persecute LGBT+ populations. Both Saudi Arabia and Iran have executed gay people in recent years, whilst Brunei has not seen any executions since the 1950s. Why take action now?

“While some say the chances of Brunei’s new penal code being applied are quite low, I am worried about the message of rejection, repression and hate it sends to LGBT+ communities far beyond Brunei’s borders.

“In recent days, LGBT+ members in the Virgin family have shared how difficult and deeply hurtful it is to read the news from Brunei. To be so aggressively singled out for being who you are and for who you love cuts very deep wounds.

“It also brings back dark memories for those who spent decades fighting hard for their freedom to love and live, and for the legal protections they now enjoy.” He continued: “Of course I am particularly worried about the LGBT+ community in Brunei, who have good reason to fear that the law will – at the very least – drive them into hiding, possibly even exile.

“While there’s hardly any help available inside the country, allies are not far away. Singapore’s leading gay rights group, Oogachaga, has set up a hotline and WhatsApp channel that offers emotional support to Brunei’s LGBT+ community. It’s an important lifeline we all should share and support.”

Branson then wrote four things that businesses could do to improve the dialogue. Those included making a safe workplace for LGBTQ employees back at home, engaging with anti-LGBTQ governments to improve laws, joining forces with other businesses and supporting LGBTQ communities wherever they are at risk. Sir Richard added: “Virgin doesn’t have operations in Brunei, yet that is no reason to remain silent. Any company doing business in the country should stand up for the value and principles it holds dear.

“Those with a presence in Brunei should signal that their offices are places where LGBT+ employees can feel safe, offering at least some measure of support and comfort in a difficult environment.

“What Brunei and many other countries need most, however, is a public and more constructive conversation about LGBT+ rights and the power of inclusion. Business must be an important part of that conversation.”

He finished, writing: “Virgin is proud to be a founding member of Open for Business, a wonderful platform that was set up specifically to fill the void and build and champion the business case for LGBT+ inclusion.

“Its most recent Channels of Influence report provides useful guidance for businesses interested in a more in-depth conversation on the best course forward.

“Demonstrating that LGBT+ inclusion is a win-win proposition for both business and society may indeed be a good starting point to effect the lasting change we should all be seeking, in Brunei and elsewhere.”