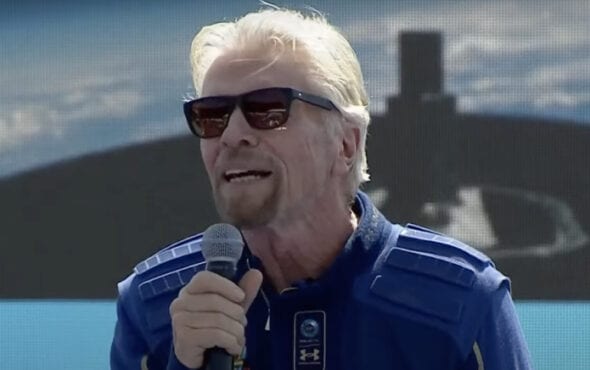 Sir Richard Branson went to space and brought a Pride flag along to honour the Pulse nightclub victims.

In an interview with The Mail, the British entrepreneur opened up about taking the flag with him on the extraterrestrial journey.

“Somebody who lost a loved one at the [Pulse Orlando] massacre asked if I would do that. We also have many, many friends who are gay and I know people who lost friends there,” he explained.

Branson’s Virgin Galactic flight comes a month after the fifth anniversary of the horrific incident.

At the time of the life-changing massacre, it was the deadliest mass shooting in US history.

Branson also brought family photos of his grandchildren and wife but was advised not to take a camera or notebooks.

“The last bit of advice I have been given from other astronauts is do not take a camera, do not take notebooks, just look out the window and look back at this incredible world we line in and take it all in,” he said.

The 70-year-old was sent 55 miles to the edge of space at three times the speed of sound.

He is the first billionaire to make the trek, with Amazon CEO Jeff Bezos and SpaceX founder Elon Musk soon to follow.

Shortly after landing, Branson opened up about the one-hour mission and said that space must be “accessible to all.”

“We want to turn the next generation of dreamers into the astronauts of today and tomorrow. All of us on this stage have had the most extraordinary experience and we’d love it if a number of you can have it too,” he said.

“If you had ever had a dream, now is the time to make it come true. I’d like to end by saying welcome to the dawn of a new space age.”

Check out the Virgin Galactic live stream here or below.