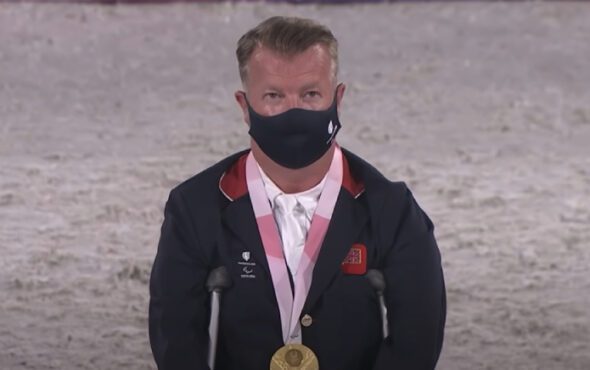 Sir Lee Pearson used his gold medal win at the Tokyo Paralympics to send a heartfelt message to the LGBTQ+ community.

On 26 August, Pearson took home his 12th gold medal since his Paralympic debut in 2000 when he and his horse, Breezer, won the Grade II individual test in dressage.

Following the win, the 47-year-old gay athlete was asked to give a message to the LGBTQ+ community by a reporter.

Pearson went on to explain that those who are “different” are not going anywhere, so we need to “embrace” each other whenever possible.

The Paralympian rounded off his speech by reminding people that he is “just a horse rider” but that he hopes to see more progress for equality soon.

“Life goes on and it’s silly in this day and age when we have countries that are still in the stone age, as we say, 100 years behind,” Pearson explained. “But I’m just a horse rider. Promise.”

This year’s Paralympics have seen at least 32 LGBTQ+ athletes competing, which is a record and more than double the number of those who took part in Rio.

Although the figure is by no means definitive as there are likely more Paralympians who are not yet out to the public, there are at least a dozen sports and eight countries represented by LGBTQ+ athletes this year.

It comes after a record-setting Tokyo Summer Games, which saw at least 185 LGBTQ+ Olympians compete (triple the number of those at Rio).

Britain has so far won a total of 28 medals at this year’s Paralympics, with Pearson’s gold being one of the country’s nine first-place prizes.