Short back and sides – gender no object under new hair app 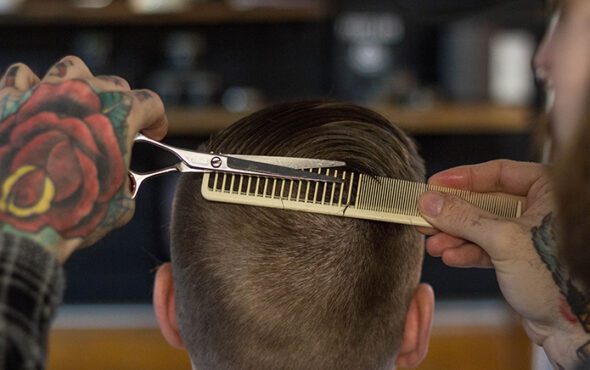 Jess Palfrey first realised the power of hair when she was ordered to shave hers off.

As a young British army recruit, she was told her cropped hairstyle did not meet regulations and would have to go.

The “traumatic” shave was not the only time Palfrey had struggled because her hairstyle did not meet norms: she has frequently been turned away by barbers who do not cater to women in a business riven with gendered divides.

Those experiences led her to launch an app offering cuts for all without the baggage of gender stereotypes, part of a growing movement towards unisex and LGBTQ+ inclusive hairdressing.

“Haircuts are really important to me and to most people in the LGBT community, because it’s a way of expressing ourselves,” said 27-year-old Palfrey, who is a lesbian and still wears her reddish-brown hair short.

“I absolutely think there is discrimination towards people that don’t want gender-norm haircuts.”

Most hairdressers charge more for a woman’s cut than a man’s, while some will only serve one gender.

That can leave women overpaying – particularly if they prefer a short cut – and alienate people who identify as neither male or female or whose style falls outside gendered norms.

Having trained as a hairdresser on leaving the military, Palfrey had a lightbulb moment when she saw spiking salon chair rental costs and rising demand for mobile hairdressers after Britain’s first coronavirus lockdown in 2020.

In response, she created the Dooo app, which allows people to book a mobile hairstylist to come to their home or work and sets charges according to the length of time their cut takes instead of their gender.

Customers also have a space to add special requests, such as their preferred pronouns or any support they may need to manage disabilities during their haircut.

The app aims to be an “Uber for hair”, accessible to people whose disability or anxiety prevents a salon visit and which also challenges gender stereotypes in the beauty industry.

“I’ve had clients … they’ve never been confident enough to really go for short hair and to express themselves,” Palfrey said as she described the impact of inclusive hairdressing.

“And then when they do it is a very, very emotional time for them. I’ve had a lot of clients cry and hug me and be amazingly emotional.”

When Palfrey left the military, she travelled the world for four years, cutting hair at Mount Everest’s base camp and giving her scuba diving instructor an underwater beard trim.

She soon saw how transformative hair could be.

“People feel amazing when they have a really good haircut, right?” Palfrey said.

It took her about 18 months from coming up with the idea for the Dooo app to launching it in November, using 30,000 pounds ($40,000) from family and friends and 45,000 pounds raised on early-stage equity investment site Crowdcube.

After a month, there were 20 hair stylists on the app, clustered around the southwest English city of Bristol where Palfrey lives, and in nearby Bath. So far, it has been downloaded on iPhones more than 400 times.

There is a small but growing number of hairdressers and barbers offering gender-neutral pricing and a safe space for people whose gender expression falls outside the norms.

Meanwhile, hair and beauty booking apps are proliferating, including big names like Treatwell and Fresha, though most do not market themselves as breaking down gender barriers.

Palfrey hopes to hold another investment round in January to fund the launch of an Android version of the app, and to expand to at least seven other cities in England and Wales.

Dooo takes a 20% commission from hairdressers using the app, which Palfrey says compares to rates of 40-60% in return for renting a chair in a typical Bristol high street salon.

She is “very aware” of criticisms that workers in the so-called gig economy – like those on her app – often lack employment protections, but hopes Dooo will help stylists make a decent living.

“I genuinely am trying to create something that is going to help people feel better in a hard time in the world,” she added.

Loxley Firlotte, a transgender man who has his hair cut by Palfrey in her hairdressing shop in Bristol and has booked through the Dooo app as well, said getting the cut he wanted had helped him feel at ease in everyday life.

“It’s definitely a part of feeling more comfortable in my skin, so pretty important,” he said.

* App does away with men’s and women’s pricing

* Cuts are priced according to cut length