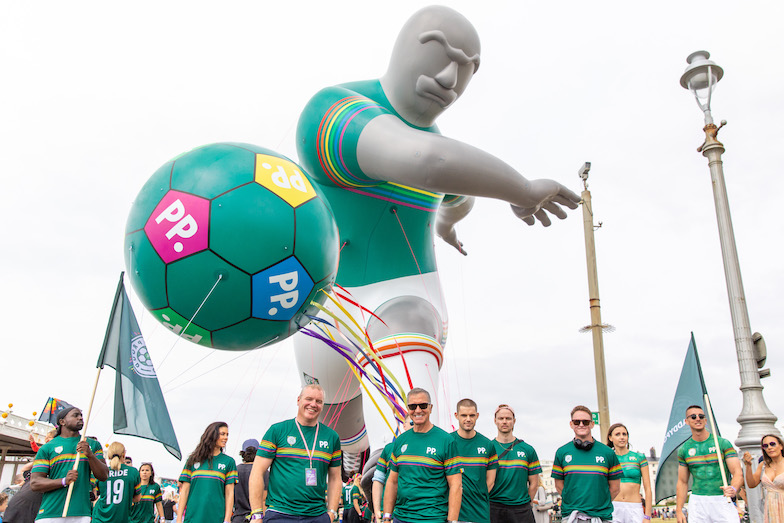 30% of fans admit they would find two men kissing at a match uncomfortable.

As part of Paddy Power’s initiative to kick out homophobia in football, they joined forces with us here at GAY TIMES to carry out their most authoritative survey yet into attitudes towards LGBTQ issues in the sport.

After speaking with 1,010 heterosexual football fans across the country, the YouGov survey revealed that homophobia within the sport is still rampant. Although 80% of fans said they would be uncomfortable hearing homophobic abuse at a match, around 30% admitted they would feel comfortable seeing two men kissing during a game.

However, almost half of the participants said they would like to see more LGBTQ people across all levels of the game – including players, managers and coaching staff. 36% thought homophobia in football was “not an issue”.

One in three heterosexual fans (37%) opined that the game is becoming a safer space for players to come out as LGBTQ, although there are currently no openly gay or bisexual male players in the Premier League. The same cannot be said for women’s football, who have happily accepted LGBTQ players into the top tiers of the sport.

The survey also found that football grounds are still challenging environments for the LGBTQ community, with a third (33%) of fans saying they believe LGBTQ supporters weren’t made to feel welcome and accepted at matches.

63% said they wouldn’t feel comfortable confronting someone for using homophobic abuse. 69% felt that the Football Association should be doing more to prevent homophobia in the game in UK, and 55% wanted their team to increase its support for LGBTQ+ rights for players.

Tag Warner, CEO at GAY TIMES, said: “Recent years have seen real and meaningful progress in tackling discrimination towards the LGBTQ+ community among football fans – but our research shows there remains significant work to be done.

“So while football fans make the right noises by saying homophobic abuse has no place in the modern game and stress that they would like to see more out LGBTQ+ figures, it’s depressing to see that a third would find two men kissing a problem while the same proportion believe homophobia is not an issue.

“With Paddy Power we’re committed to rooting out and kicking out homophobia wherever it’s located. These problematic attitudes tarnish a sport that brings so much happiness to millions across the country.”

A spokesperson for Paddy Power said: “We come from a privileged position and have tried to make serious efforts to tackle homophobia in football for several years. These statistics show that while others too have done outstanding work to stamp it out, there is a huge task still ahead.”