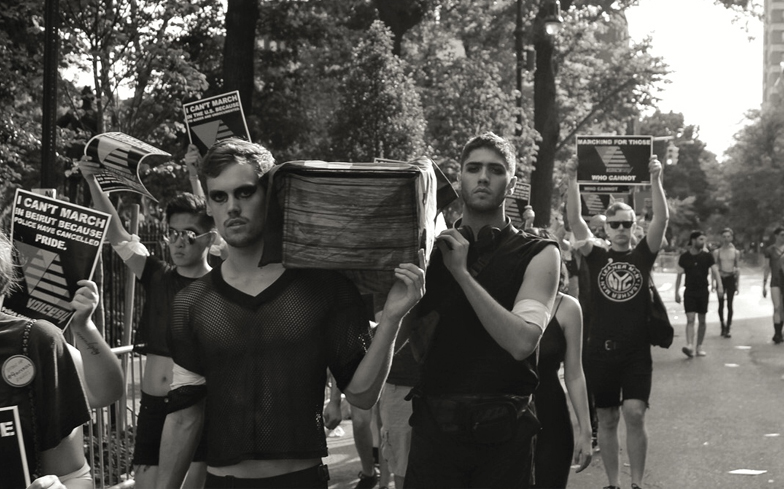 While Pride parades around the world rightfully include celebrations of how far we’ve come as a community, it should also serve to shine a spotlight on the everyday injustices, inequality and discrimination LGBTQ people still face.

Having formed less than a year ago, LGBTQ activist group Voices4 wanted to send a powerful message for their debut march at New York City Pride.

Their theme was to march for the queer people who cannot, carrying 10 coffins to represent lives taken as a result of crimes against LGBTQ people.

They also held signs highlighting the injustice queer people still face all over the world – especially in countries where being LGBTQ is punishable. In these photos taken by Danny Virga – which can be seen here first, exclusively on Gay Times – the striking display certainly got the message across.

“Creating Voices4’s visual narrative for the NYC Pride March was the most important project I’ve ever worked on,” said Voices4’s Head of Visuals, Jesse Hepworth. “Marching is a rite of passage for any activist group. Because we are under a year old this Pride was our ‘debut’ as an organization. That meant that our visuals had to be strong and powerful.

“The visuals team scoured the archives of our predecessors and contemporaries to pay homage to those who inspired our formation and structure as a group, from ACT UP’s funeral procession to the White House in 1998 to GAG’s Human Beings which debuted at the NYC Pride March in 2016. “We knew our plan was a lofty one and the pressure was on between beating deadlines, signing up volunteers, and making sure we were capturing the spirit of the communities represented on our signs. I immigrated from South Korea to the United States in 1996 so I know the importance of proper representation and how difficult that can be.”

Speaking about the reaction to their display, Dominic Finelli, a member of the Voices4 Research Committee, said: “I heard one person call our funeral procession a buzzkill, and I was so proud. “It was really encouraging to see the majority of the crowd raise a fist or place a hand to their hearts when we passed by – a small tribute to our queer siblings who are disenfranchised and hidden – persecuted or buried.”

Rachel Levit was also part of the research team who brought the powerful display together, explaining that her reason for marching was in honour of queer people being fatally persecuted around the globe. “I chose to focus my research on Mexico, Guatemala, Belize and Honduras because of its regional position and intersection with current hot button immigration issues,” Rachel explained.

“Before signing up for this research push, I had read about Roxana Hernandez, a transgender woman fleeing Honduras, who was seeking asylum.

“Roxana was fleeing persecution, tried entering the US multiple times and eventually died in ICE custody. Roxana’s story really propelled my interest in researching the policies and societal norms that LGBTQIA+ people face in our neighbouring countries.”

Speaking about the piece of research that affected her the most, she added: “​For me it was finding a press release from Organisation of American States that basically was an excel sheet of violence towards LGBTI peoples in the Americas and The Caribbean between 2013-2014.

“It was shocking to scroll through and see 770 acts of violence that occurred in 13 months.”

If you want to find out more about Voices4 and the work they are doing to fight for total global queer liberation, you can visit their official website here.