The secretive gay language that gave LGBTQ people a voice 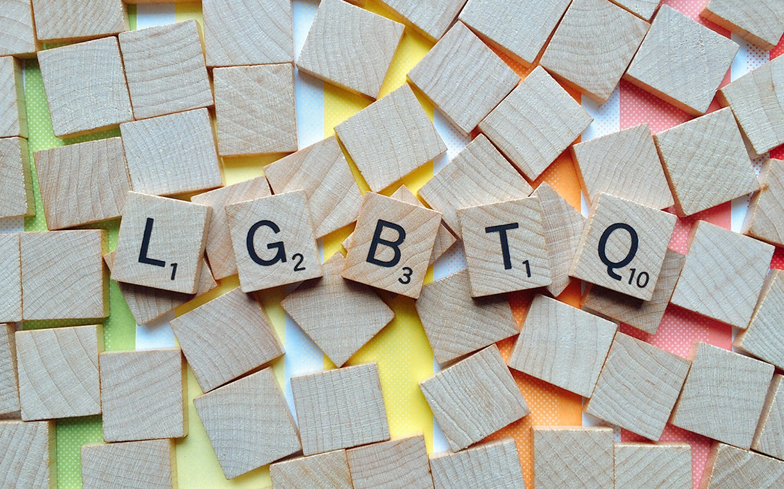 Secret languages and discrete social signals have been used by queer people for centuries to express their true identity and talk without fear of anti-gay persecution.

Systems like the hanky code in the 1970s, where the colour of your handkerchief would indicate preferred sexual activities, and artist Simeon Solomon’s 1864 work ‘Sappho and Erinna in a Garden at Mytilene’ featuring a same-sex couple with a pair of doves seated above them, highlighting their love covertly. Both show how gay people have subtly developed ways to communicate their sexuality in the face of immense oppression.

Before the partial decriminalisation of homosexual acts in 1967, members of the gay community had to keep their sexuality a closely held secret or face harsh prison sentences and potentially be subjected to chemical castration. Even after the Sexual Offences Act was passed, gay people were unduly targeted by police and there was little overnight change in widely held homophobic social attitudes.

Polari, a form of language used widely by the gay community, is an eclectic mix of many different dialects, including Italian, Yiddish, American air force slang and Cockney rhyming slang, which could be heard throughout underground gay bars and clubs in the early 20th century.

Passed on solely by word of mouth, few could speak the entire lexicon with many possessing a small vocabulary containing everyday words like ‘charver’ (sex), ‘Betty bracelets’ (police), ‘crimper’ (hairdresser) and ‘slap’ (make-up). “It caught on in the gay community because British society was hideously homophobic at almost every level – the church, the media, education, science, health, the military, family life – they were all giving off the message, ‘Homosexuality is wrong, wicked and mad!’,” says Paul Baker, professor of linguistics and English language at Lancaster University and the world’s foremost Polari expert.

The humour found within Polari was used as a type of coping mechanism to survive regular homophobic violence and abuse. By allowing gays to have their own exclusive language virtually unknown to straight people, Polari presented newly out gays with an insight into queer culture and gave them the sense of belonging to a wider community of similar people, with the language taking on a more relaxed role outside of public places.

“In more private social spaces it was often used as an expression of creativity and camp humour, so could be a form of tension release and entertainment, as well as a way of bonding and demonstrating shared identity,” adds Dr Baker.

Polari showed a different side to gay culture that wasn’t widely seen at the time, particularly highlighting how working class gay men spoke. Drag queens, theatre workers and gay sailors all used this lexicon, as well as some straight people who had learnt it from gay friends.

During the late 19th to early 20th century, London was perhaps the modern world’s largest melting pot for divergent cultures, which is why the language heavily borrows from a range of longstanding dialects.

“You’ve got traveling fairground workers, from Italy in particular, and Jewish refugees from all over Eastern Europe, mixing together in the East End with thieves, gays and prostitutes. That was where Polari really emerged in the form as we know it now,” adds Dolan.

Out of fashion
The language began its fall into disuse after two popular characters on BBC Radio comedy programme Round the Horne incorporated a version of Polari, making the gay slang a secret no more. Hugh Paddick and Kenneth Williams played camp-duo Julian and Sandy from 1965 to 1968 and introduced Polari to millions of listeners when homosexual acts were still illegal. Not only did many of the slang catchphrases and words become part of Britain’s everyday vocabulary, but parts of the country never before exposed to gay culture were learning about its complexities for the first time.

“They were unapologetically queer at a time when most gay characters would end up dead at the end of a show, in prison or beaten up. Julian and Sandy were portrayed as these happy gay people, who happened to use Polari,” says Dolan.

The decriminalisation of homosexuality, and later moves towards equal rights, reduced the need for an alternative vernacular. Yet Polari left an indelible mark on the English language, which can be seen even today, and isn’t simply a discarded relic from the past. Thanks to a new generation of gay artists, filmmakers and academics, the language is being used to showcase how different life as an openly gay man was in the not-so-distant past.

“Polari is almost like a time capsule – the words themselves conjure a period of cottaging, daring sexual acts and a fear of the law,” says London-based filmmaking duo Brian Fairbairn and Karl Eccleston. “We’re not from the UK and to be honest we were really just surprised to find out that it had existed at all.”

The pair wrote and directed the short film Putting on the Dish in 2015, which shows a typical conversation on a park bench between two gay men in the 1960s, spoken entirely in Polari. The exchange would sound like gibberish to the vast majority of gay men today, but could have been understood by much of the gay community decades ago.

While the language was used as a method to communicate with less fear of being outed and persecuted, it became much more than just a rudimentary identification technique.

“As the gay sub-strand of Polari developed they added their own words and expressions – and these expressions point to the fact that it wasn’t just about needing to fly under the radar, it was also a celebration of who they were. They’re not just code words – there’s a real flamboyance and camp to Polari,” explains Brian and Karl.

This campiness was one of a long list of factors that led the gay community to turn away from this once controversial language. Soon after the Gay Liberation Front started in the early 1970s, activists wanted all gay people to be able to live out and proud, with a code that effectively hid their sexuality unsurprisingly becoming unpopular. Alongside a changing political agenda, Polari was beginning to be seen as a language used by an older generation, leading many to stop using what was increasingly perceived as an outdated dialect.

“Polari itself was viewed as aping heterosexual gender roles, too focused around sex and gossip, and some people pointed out that some of the words could be used in racist or sexist ways. People were also getting a newer cultural model of how to be gay from America, which didn’t include Polari and instead focused on appearing macho,” says Dr Baker, author of Fantabulosa: A Dictionary of Polari and Gay Slang.

Renewed interest
Polari is still making headlines today. In early 2017, trainee Church of England priests performed a service in Polari in an attempt to ‘queer the liturgy of evening prayer’ for LGBTQ History Month. For example, the original ‘Glory be to the father, and to the son, and the Holy Spirit’ prayer was translated to “Fabeness be to the Auntie, and to the Homie Chavvie, and to the Fantabulosa Fairy”. Westcott House in Cambridge, the theological college that hosted the service, quickly apologised for the ‘hugely regrettable’ event.

This clash between younger, progressive gay men in the Church of England and the religious establishment is just one of many, according to Dr Baker. “There are some battles that are being fought. They will be won of course, eventually. And then everyone will wonder what the fuss was all about. But that’s the British way,” he says.

While the language of Polari may have fallen out of everyday use, gay men still continue to create their own slang terms and retain a strong sense of the camp humour central to Polari. “RuPaul’s Drag Race is a great example of lexical innovation – with terms like ‘shady’, ‘how’s your head’, ‘realness’ and ‘read’ being popularised,” says Dr Baker.

Dr Baker has seen first-hand how there is growing interest in Polari as a form of gay social history, rather than an actively used language, with academics, artists, journalists and playwrights regularly getting in touch with him about using Polari in one of their projects.

Polari is a vibrant illustration of our shared queer history and although you’re unlikely to hear ‘How bona to vada your dolly old eek!’, roughly translated to ‘Nice to see your pretty face!’, in any of the bars lining Old Compton Street today, the language provides a detailed and candid insight into what life was like for gay men just a few generations ago.

“We don’t think the renewed interest in Polari is going to lead to a revival or anything, but for queer communities today it’s a reminder of how recent that historical oppression was,” conclude Brian and Karl.