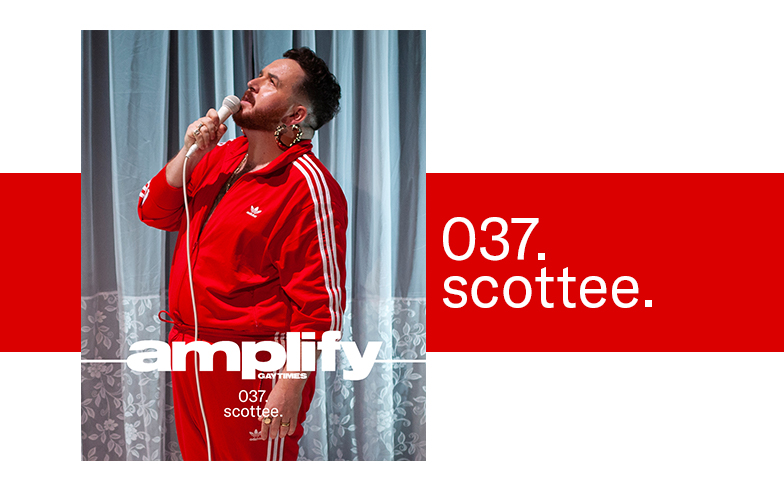 This October, critically-acclaimed playwright and activist Scottee will be bringing his new show Class to HOME in Manchester after its well-received debut at Assembly during the Edinburgh Fringe Festival.

Working alongside Welsh director Sam Curtis Lindsay, the show unpacks Scottee’s working-class identity and the long-lasting effects of precariousness. It’s not for the working class because they understand Scottee’s journey. It’s a show for the middle class to acknowledge their privilege. “We’re coming up to 10 years of austerity in the UK, an austerity that’s been led by a Conservative government that has seen 140,000 preventable deaths, that sees four million people using food banks, 4.5 million children growing up in poverty, and an estimated 250,000 people who are homeless or without a fixed address,” he says of why the show is timely. “I feel like we just need to be reminded that this is happening and it’s on our doorstep and death is a consequence to it.”

It took years for Scottee to reclaim his working-class identity and feel comfortable enough to take it on the road. Growing up he felt shame, embarrassment and a sense of injustice, especially when he was invited to his friend’s houses and was indulged with red wine in their “food-only” room, which was – in his words – “alien” to him. On Scottee’s council estate, he would witness kids having their heads forcibly shaven due to infestation, women using toilet roll for their periods because they couldn’t afford tampons and men who would use alcohol as a tool to process their traumatic childhood. “Food-only” rooms weren’t a thing. “It’s that moment when you start to awaken to the difference, and when you start to have conversations with friends about how easy it is for them to just move home or ask for money,” he tells us. “Working-class kids, we don’t have that support network.” Scottee didn’t have that support network when it came to his and his parents’ mental health. Living in substandard housing with no financial means to consult a doctor meant his family were unable to access the correct medical treatment.

“I have had people say to me when I’ve gone through depressive episodes, ‘Have you thought about therapy?’ It’s like, ‘I haven’t got a hundred quid a week to go sit in a room and talk to somebody,’” he explains. “We need to really acknowledge class if we are going to be talking about mental health awareness, because it informs so much about what services are available to us and how quickly we’re able to ask for help, Particularly within working-class communities, where you just have to get on with it because you just have to earn. Paying your rent is more of a priority than seeking help.” Scottee isn’t erasing the mental health experiences of people with economic privilege, he just wants it to be acknowledged that it’s easier for those who do have said economic privilege to receive help. “I don’t think middle-class kids have ever had to process what it is to look after your parents because wealth and privilege mean that they don’t ever have to,” he continues. “It means that working-class kids grow up way too quickly, we live with adult stress and the stress of finance way too young.”

At the age of 17, Scottee came out to his mother in the most working-class way possible: whilst watching Jeremy Kyle. The episode featured two gay men, which prompted Scottee to shout to his mother as she was applying makeup: “I’m gay!” Who needs a big speech beforehand anyway? She dropped her makeup brush and accepted him, without hesitation. However, Scottee admits that he was one of the lucky ones in his area. “It was very prolific for parents, particularly the parents on my estate, to disown their children and make them homeless,” he recalls. “I wasn’t that afraid, because I know my mum’s a good person and she used to go to The Black Cap.” He still received his fair share of homophobic abuse but had a hero in a “black femme” friend called Louisa, whose cousins had a reputation of being the “hardest boys” on the estate. But that abuse wasn’t just limited to his council state. It was prevalent within his own community.

After being sold the idea by Russell T. Davies and Queer As Folk that the gay community would “wanna have sex” with him and perceive him as “irresistible”, Scottee made his debut on the queer club scene. He was shamed for his weight and his femininity and was even turned away from gay clubs for not wearing the right attire because he looked too working class. Over the past few years, we’ve seen an increase in prolific celebrities coming out as LGBTQ, but there’s a significant lack in prolific queer celebrities who come from a working-class background, which Scottee says is “telling” in who is allowed to take space within the scene. “Where are my working-class icons? I think in the same way we look at parliament and the government, those who have been allowed to take space within the LGBTQ community who have been platformed and pushed forward are often those who come from a privileged background.”

It wasn’t until he “found the lesbians” that he felt truly accepted. “I still have such an affinity with queer women and their spaces because it’s not as loaded or as charged as gay male and gender-exclusionary spaces can be,” he reveals. “I was found by these beautiful lesbians who had sorted some of their stuff out a long time ago. They understood what it was to be pushed out of gay male scenes. We just ended up being the rejects and instead of wallowing, we created a culture that was much better than what was being presented.” It’s 16 years later and queer women are still left out of the conversation. White “masc” gays still rule the scene and certain queer clubs are still refusing entry to queer women, even right here in London.

“What we have to remember about gay men is that they’re also men, so they also hold misogyny and the privilege of masculinity,” Scottee opines. “Culturally, within the queer community, women and their role within the activism of the community has been ignored for that reason.” Scottee raises Marsha P. Johnson and Storm DeLavarie – two prominent figures in the Stonewall Uprising and the Gay Liberation Front – and the radical butch lesbians during the HIV/AIDS crisis that went to hospices to nurse the sick, as two of many narratives that are often excluded from queer culture. “So much of their input is invalidated, ignored and kept to the sidelines and what I find really interesting is that we still have a community, particularly in nightclub economy, that is gender-exclusionary. In a heterosexual world, there would be lawsuits aplenty. It feels so ludicrous that we’re still having this conversation.”

It’s not just misogyny within the community. There’s constant shaming for those who don’t fit in the “thin, white, able-bodied” archetype “who have whiter teeth than Davey Wavey”. Prolific gay actors who have talked about non-confirmative bodies as “disgusting” and femme-identifying people as “namby-pamby” are a significant factor in this, says Scottee. “That has contributed to the consciousness of the community, that there is only one way to be gay.” The star even launched an experiment, of sorts. He and his friends would attend gay bars and see who would get served first. Scottee was often ignored and his friends would be served straight away. This type of discrimination and prejudice he’s experienced within the gay scene is why he created Hamburger Queen, a show that has since received universal acclaim and achieved cult status for propelling plus-sized people to the forefront. “I had to create a space that was about anybody being able to show their body, and it’s about celebrating the different types of fatness and making it a queer utopia,” he says of the show. “In the community, if you are not the “right shape” or size, if you are not an adonis, then your sexual capital is completely written off.” Obviously, the show received backlash from those who felt excluded from the narrative, despite being part of, well, every narrative. “Do you know how much it pisses off the thin people?” he laughs. “People are like, ‘You’re promoting unhealthiness! You’re gonna die early!’ It’s like, ‘Well hun, who gives a shit?’”

Although there have been many conversations around body-positivity in recent years (Lizzo, Dexter Mayfield and Tess Holliday have been notable advocates), Scottee doesn’t think attitudes have progressed. Since his debut in the industry, he’s acquired a dedicated following on social media and is often applauded for igniting conversations around ‘sensitive’ subjects – but even some of his followers feel the need to reprimand his lifestyle. “I find it so interesting that there are people that follow me who still disagree with my body and think I should change and adapt,” he says. “I find it really interesting that even in a space that I’ve tried to curate as being a space for my body to exist without being dictated to, that people still feel the need to tell me that I’m wrong.” Scottee adds: “I think all of this stuff around acknowledging other experiences, progression and development has come from a halfway house politic. Some members of the community have now been given enough privilege that they feel they are safe and they are allowed, and so they don’t want to rock the boat. They don’t want to be progressive, they don’t want to change because it might mean that stuff has to change for them.”

Despite our current era consisting of powerful political figures with staunch anti-gay views such as Donald Trump, Boris Johnson and Jair Bolsonaro, the multiple deaths of trans women across the world and ‘gay purges’ in Chechnya, the community still feels divided. There’s a notable hierarchy, in which white “masc” gays sit at the top and black trans women sit at the bottom. Scottee says there are some “pretty shitty” opinions about members within our community because white gay men, in particular, have a severe case of “oppression Olympics”. “I think it’s really interesting that when I have conversations about class, particularly with white gay men, there’s often an eye roll or a sense of, ‘It’s a chip on my shoulder.’ They want to state how big their oppression is compared to everyone else. I think that tells us where the community is at with acknowledging class.” If we’re going to create our “own utopia” and address the mistreatment within the community, we need to step up and do the housework, Scottee stresses.

“For misogyny to be tackled within the community, we need to look outwards and look at the patriarchy,” he explains. “For the racism that happens within the community, we can’t just look at what’s happening in the community, we need to look at systemic racism. What we should probably start to do is think about ways of being more queer and going against the grain, or be able to recreate our own worlds and our own utopias because the same rules do not exist for us.” Scottee wants us to band together and created a united front, in a similar fashion to how RuPaul’s Drag Race has galvanised communities over the past decade. “You would’ve thought that shit hitting the fan politically might’ve been that, but it hasn’t. We’re seeing a de-politicisation of the LGBTQ community and we really need to engage with our politics because I tell you, if the world keeps going the way that it is, turning increasingly right-wing, if climate goes in the way that it is, our equality will only be something that was on a piece of paper for a short period of time.” See? This is why Class is so timely right now.

Class runs from 23-26 October at HOME Manchester. You can purchase tickets here.