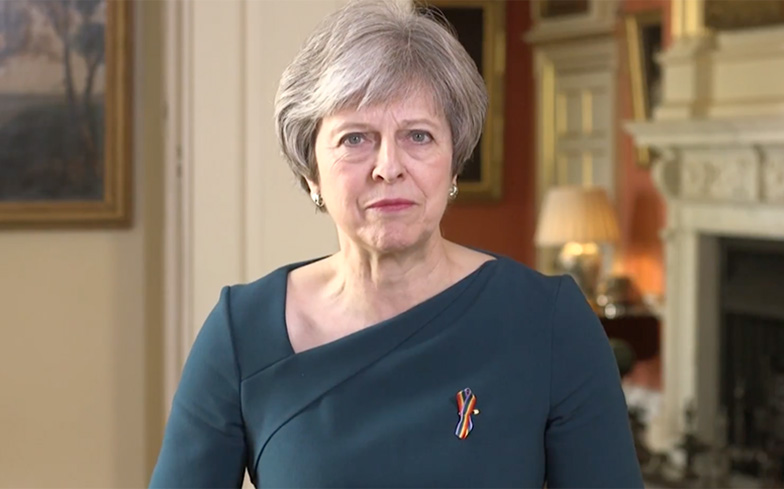 Theresa May has called for an end to anti-LGBTQ bullying ahead of School Diversity Week.

30 years after Section 28 of the Local Government Act banned the “promotion of homosexuality” in the classroom, a special reception was held in Speaker’s House ahead of School Diversity Week 2018.

School Diversity Week, which takes place from 2-6 July this year, was launched by charity Just Like Us in 2016 with the support of the Department for Education to “empower schools across the UK to tackle homophobia, biphobia and transphobia”.

Over 400,000 teachers and pupils are expected to take part in events championing LGBTQ equality during the week.

Despite advances in equal rights and acceptance across the UK, Just Like Us reports that almost 90% of young LGBTQ people still hear homophobic language in schools and 50% self-harm.

“Everyone has a right to feel safe and happy at school, but when you are coming to terms with your sexuality the classroom, the playground and the common room can sometimes be intimidating places,” Prime Minister Theresa May said.

“Having visible role models who have been there before and know how it feels can help give a young person the confidence to embrace who they are, and they can encourage everyone in school to be positive and accepting.

“We need to eradicate homophobic, biphobic and transphobic bullying in schools, and challenge stigma and hostility wherever it exists in our society, and we need to speak up for the human rights of LGBT people around the world.”

She added: “We all do better and our whole country is enriched when we are free to be ourselves.”

The CEO of Just Like Us, Tim Ramsey, added: “Growing up, I never heard a teacher say anything positive about LGBT issues – it made school a lonely and frightening time.

“This year, thirty years after Section 28 banned homosexuality in the classroom, we want even more schools to join School Diversity Week and take action to end homophobia, biphobia and transphobia.”

School Diversity Week 2018 runs from 2-6 July, and you can find more information here.