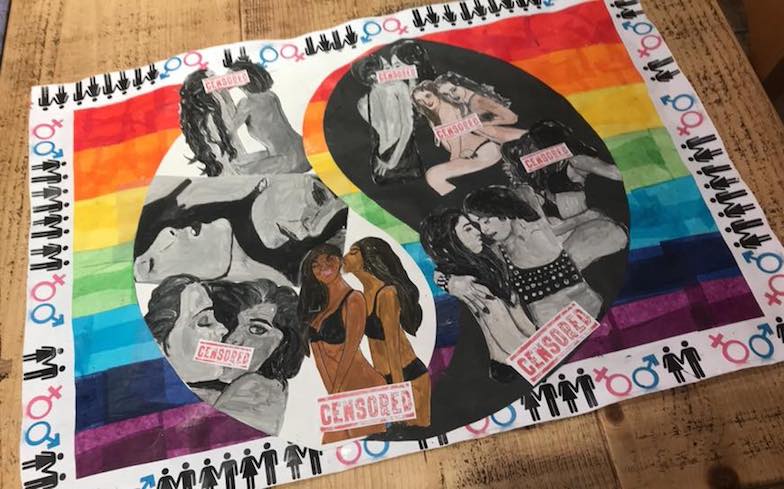 “I can’t see why they censored it. I wanted to get across that it shouldn’t be frowned upon and it shows girls can be together. It is something I feel passionate about.”

A student’s GCSE art project depicting two women kissing has been censored by teachers for being too “sexually explicit.”

16-year-old Megan Angus from Laurence Jackson School in North Yorkshire, England, collected her assignment – which she had spent 40 hours on – to find it had been covered in red ‘censored’ stickers. The stickers covered the lips of women kissing, as well as their underwear.

Angus wrote on Facebook: “Can’t get more of a homophobic school that Laurence Jackson school sticking censored allover my work not getting my permission, not the first time for that school ruined my work I spent 40 hours on thanks a lot.”

In an interview with Metro, Angus said: “I can’t see why they censored it. When you go to an art gallery, they don’t censor them there. I wanted my work to be shown how I left it.”

Reportedly, students were assigned to create a piece of artwork which addresses an outsider community.

“I did same-sex relationships as they seem to be out of place in society,” Angus said. “I wanted to get across that it shouldn’t be frowned upon and it shows girls can be together. It is something I feel passionate about.”

A spokesperson for Laurence Jackson replied to the criticism: “Due to the sexually explicit nature of some of the drawings in the student’s work, a censored strip of paper was Blu-tacked over these areas. As a secondary school, we needed to be mindful of the impact this may have on younger students.

“This piece of artwork contributed positively to the student achieving a good grade at GCSE. In no way was she discouraged from producing work of this nature and her artistic talents were celebrated by our art department.

“Laurence Jackson School is in no way homophobic; sexually explicit images of any nature would have been censored if displayed. In retrospect, we may have been overzealous in censoring some images within the piece, and for that we apologise for any offence caused.”