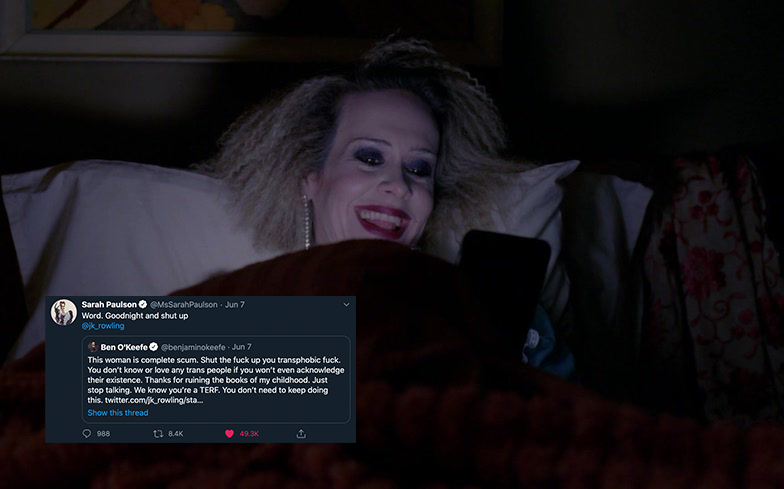 Bow down to your Supreme!

Sarah Paulson has criticised JK Rowling over her harmful and archaic comments about the trans community.

Over the weekend, the once renowned Harry Potter author continued to destroy her beloved legacy as she – in the words one of one viral tweet – “vomited TERFery” to her 14 million Twitter followers.

Despite claiming to “love” trans people, JK posted a series of tweets against the community following an article about people who menstruate, and how best to support them after the coronavirus pandemic has ended.

The article was simply highlighting ways to be inclusive as trans men and non-binary individuals can also menstruate.

“‘People who menstruate.’ I’m sure there used to be a word for those people. Someone help me out. Wumben? Wimpund? Woomud? If sex isn’t real, there’s no same-sex attraction,” she wrote.

“If sex isn’t real, the lived reality of women globally is erased. I know and love trans people, but erasing the concept of sex removes the ability of many to meaningfully discuss their lives. It isn’t hate to speak the truth.”

She then attempted to claim that she supported the trans community, writing: “The idea that women like me, who’ve been empathetic to trans people for decades, feeling kinship because they’re vulnerable in the same way as women – ie, to male violence – ‘hate’ trans people because they think sex is real and has lived consequences – is a nonsense.

“I respect every trans person’s right to live any way that feels authentic and comfortable to them. I’d march with you if you were discriminated against on the basis of being trans. My life has been shaped by being female. I do not believe it’s hateful to say so.”

She also retweeted an article from an anti-trans website, as well a prominent figure in the anti-trans group, the LGB Alliance, and claimed to have spent the last three years researching papers from trans individuals, medics and gender specialists.

Her comments were met with widespread backlash from the LGBTQ+ community and celebrities such as Mara Wilson, Zara Larsson, Jonathan Van Ness, Jameela Jamil, Juno Birch, Shon Faye and Bob the Drag Queen.

American Horror Story alum Sarah Paulson also proved her status as the reigning “Supreme” by agreeing with a tweet that called JK “complete scum” and requested for her to “shut the fuck up you transphobic fuck.”

“Word. Goodnight and shut up @jk_rowling,” she responded. Fans were living for Sarah’s unfiltered response and for “sticking up” for the trans community. See the best reactions from Twitter below.

JK’s transphobic views initially came to light when fans noticed that she was following a proud transphobe on Twitter. She was also criticised in 2018 when someone discovered she liked a tweet that said trans women are “men in dresses”.

She also proudly supported Maya Forstater, a researcher who lost her job after tweeting that trans women cannot change their biological sex, in reaction to proposals of the Gender Recognition Act which would allow people to identify as the opposite sex.

Related: Feminist bookstore will donate to Mermaids whenever someone buys a JK Rowling book.