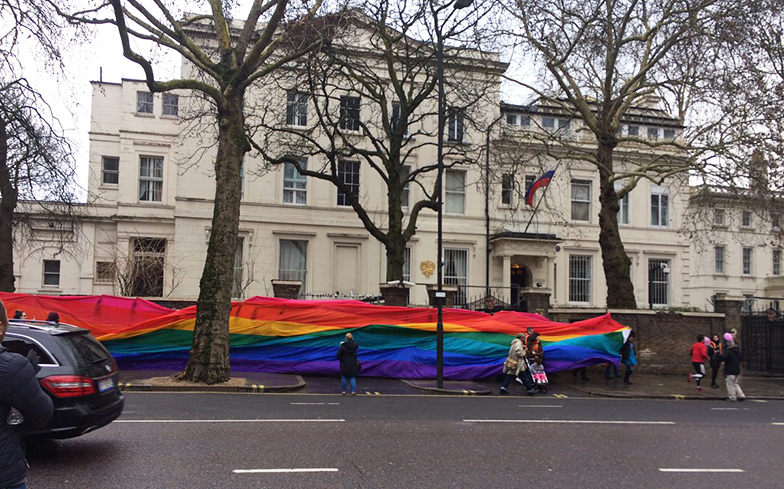 A protest against Chechnya’s anti-gay purge took place in London over the weekend.

Around 100 people rallied outside the Russian embassy in Kensington, London on Sunday 27 January to raise awareness of and call for an end to the persecution of the LGBTQ community in the Chechen Republic.

Earlier this month, it was reported that Chechnya had launched another crackdown on LGBTQ people in the region, with activists claiming that two people have been killed and a further 40 have been detained because of their sexual orientation.

The protest had four demands: For Theresa May to publicly condemn Chechnya’s atrocities; for governments to shelter refugees from Chechnya; for a United Nations investigation on Russia; and for Russian authorities to bring those responsible to justice.

As well as protest signs reading “love is not a crime” and “queers of the world unite”, a rainbow Pride flag was wrapped around the Russian embassy in a grand statement that was hard to ignore.

We wrapped the @RussianEmbassy with the historic #GilbertBaker #RainbowFlag that dates from 1994, the 25th anniversary of the #Stonewall uprising. 🏳️‍🌈 Donate today to help pay for an #LGBT+ person in #Chechnya to be evacuated to safety: https://t.co/5uti2XF1VQ pic.twitter.com/8Xy0BZlDus

At Russian consulate in London now. Standing in solidarity with Chechnya LGBTs. No tyranny lasts forever. Kadyrov & Putin will have their fall. Russia will be free. ⁦@rulgbtnet⁩ ⁦@ComingOutSpb⁩ ⁦@mashagessen⁩ ⁦@astroehlein⁩ ⁦@Billbrowder⁩ pic.twitter.com/Hbo1zRQUxC

The protest coincided with Holocaust Memorial Day, marking 80 years since the start of World War II, so also served as remembrance of the thousands of LGBTQ individuals who were murdered during the Nazi Holocaust.

Michael Salter-Church MBE, Co-Chair of Pride in London, said: “50 years on from brave activists taking a stand at Stonewall, the appalling events in Chechnya highlight with vivid brutality that the fight isn’t over.

“Whilst the UK is focused on Brexit we mustn’t forget those who need our support. We must take a stand for our community in countries where they can’t as it could – and does – cost them their lives.

“The British Government must raise this at the highest level with Russia and call for both an end to this persecution and the prosecution of the perpetrators. Let us also show the world our support of human rights by raising this at the UN.”

If you want to help LGBTQ people living in Chechnya, you can donate at allout.org