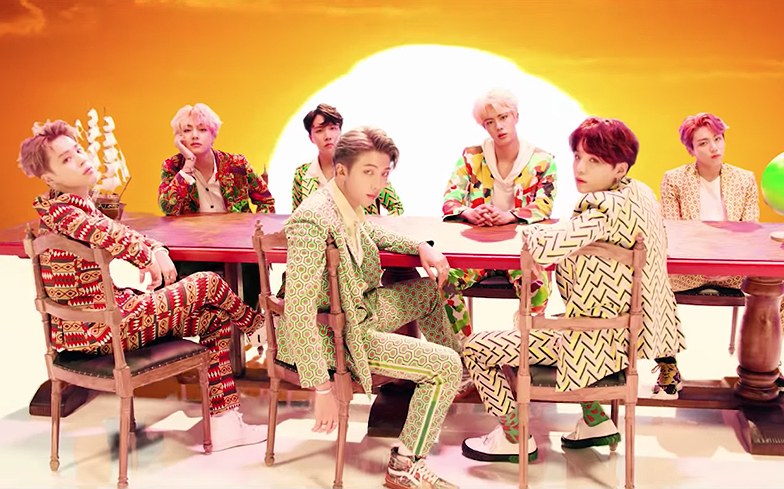 A Russian print shop refused to print a BTS banner for a K-pop café due to “gay propaganda.”

According to a report from RT, the PinkyPop café owners were looking to print “greeting cards and banners” that featured their customer’s favourite K-Pop groups.

Taking to Instagram stories, the owners of the café elaborated about the situation and the printers’ dismissive behaviour.

“We discussed all the work details, and placed our first order… after seeing the photos of the bands BTS and Stray Kids, which they were supposed to print, they began to ignore us,” they wrote.

When the print shop eventually responded to the café owners, they refused to take part in the job after claiming that BTS promotes a “non-traditional orientation.”

“Do I understand correctly that these people have a non-traditional orientation? I have seen them – they aren’t hiding their orientation. We won’t be printing this,” the printer shop said.

The printer went on to say that the café owners were “stupid to support something that may leave you with no grandchildren” and asked if they wanted their “children to become perverts.”

“We have enough normal clients to be able to choose who to work with and who not to,” they added.

This isn’t the first time that BTS received pushback from Russian conservatives.

Back in 2019, a screening of their hit film BTS World Tour: Love Yourself was cancelled due to “over-the-top immoral behaviour”.

The film was scheduled to show at Cinema Hall in Makhachkala after hundreds of fans began a social media campaign to screen the film in their city.

According to The Moscow Times, a local conservative group that opposes such ‘behaviour’ warned that BTS were “Korean homosexuals”.

However, the concert movie was shown in several different Russian cities.

Even though same-sex relationships are legal, Russia does have a law banning the release of “propaganda on non-traditional sexual relations.”

Since the anti-LGBTQ+ legislation went into effect, human rights groups have spoken out against the harmful law.

In 2018, a report from the Human Rights Campaign titled “No Support: Russia’s ‘Gay Propaganda’ Law Imperils LGBT Youth” found that Russia’s “gay propaganda” law had a negative impact on LGBTQ+ children in the country.

The group interviewed LGBTQ+ youth living in the country and found that under the law they were prevented from accessing inclusive education and support services. They also found that the law prevented mental health specialists from offering the necessary support.