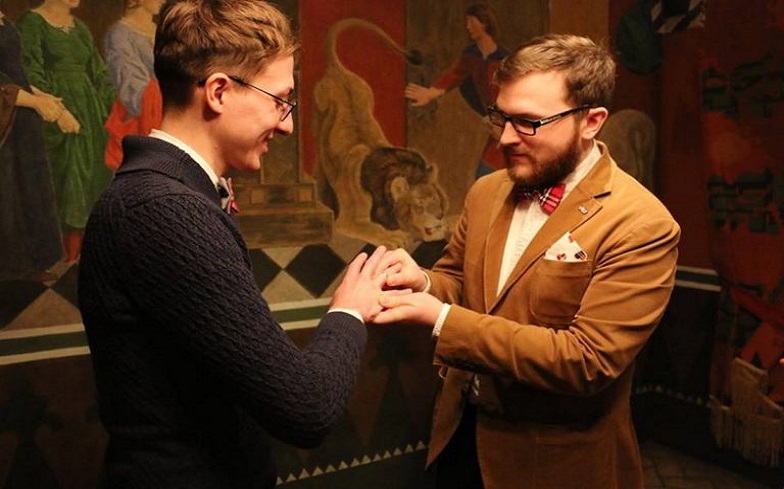 The move even shocked the newlyweds.

When Eugene Wojciehowski and Pavel Stotsko got married in Copenhagen on January 4, they weren’t expecting their marriage to be seen as legal back in their home country of Russia.

But to their — and everyone else’s — shock and delight, a government employee stamped their passports with the official confirmation of marriage in only five minutes.

Speaking to TV Rain, the couple even said that the employee didn’t ask any “superfluous questions” and that his expression didn’t even change.

And although there is a line that says there needs to be “the mutual voluntary consent of the man and woman,” it doesn’t explicitly state that the marriage can’t be a same-sex one.

TV Rain contacted the office where the marriage was confirmed, but the press officer didn’t clear up anything about that line.

In their response, they said: “Your question would make sense if the Russian Federation’s Family Code used a different formulation.

“For example, ‘voluntary consent of persons entering into marriage.’

“Further discussion of your issue I think is inexpedient,” the response finished.

Sadly, however, it seems that Russia is already trying to backtrack on this, as Pavel wrote on Facebook that authorities have allegedly “cancelled” their passports. Pavel has promised to challenge all of the actions from the Ministry of Internal Affairs in court.

The fact that the marriage was even recognised is a massive shock as last week a poll found that 83% of Russians thought that gay sex was “reprehensible.” The number is a sharp rise from the 76% who were asked the same question in 2008, and the 68% of people back in 1998.