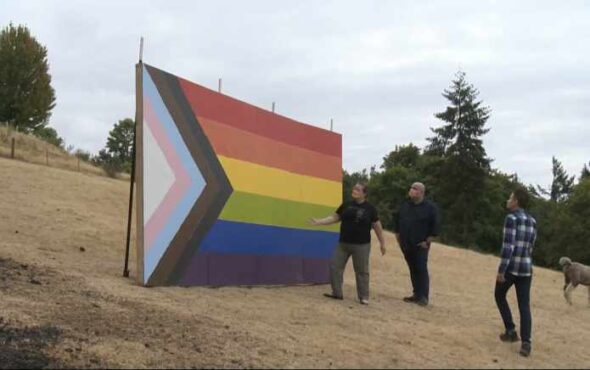 Residents of a town came together to build a giant Pride flag in view of a school after its board voted to ban it.

Dave Brown, the school board chair, said: “It has to be for all kids.”

Erin McCarthy and her husband Jaybill, who own land on a hill close to Newberg High School, vehemently disagreed with the outcome and decided to take action.

“‘We’re going to erase a bunch of people,’ is what it felt like to me,” Jaybill said.

The couple opted to build the flag in view of the school’s students in a bid to make sure their inclusive message was heard.

Erin explained: “We wanted maximum visibility. The result is pretty amazing, we love it.

“It’s not expressing a Democratic idea or Republican idea or conservative or liberal. It’s human beings.

This is not the first time the pair have used artwork to show their support for the LGBTQ+ community, as a barn at their home has the word “love” painted on it in rainbow colours.

After sharing their plan for the giant flag on social media, the couple received hundreds of supportive messages.

Some people donated money for resources, with others helping them construct the flag over the weekend of August 14 and 15.

The flag was painted on little pieces of wood before being mounted together and featured the Daniel Quasar Progress Pride flag design.

“You are not alone,” Erin said of the flag’s message. “Even though this is difficult, there are people who are there for you.”