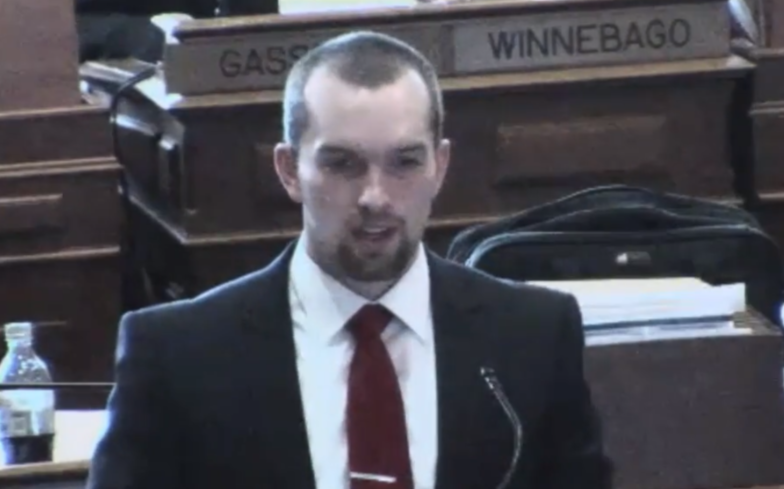 Several Republicans took issue with the flying of the flag.

Earlier this year, Iowa became the first state to fly the trans flag on its statehouse building, doing so a few hours before California. The Iowa Safe Schools petitioned to have the flag fly during Transgender Day of Remembrance.

The flag flew only for a few minutes, and yet this still drew considerable ire from Republican lawmakers in the state, one of whom compared it to part of the larger “rainbow jihad.”

One of those Republicans, Dean Fisher, told the Iowa Standard: “I’d sure like to know the history of who else has been able to fly their flag over the Capitol, but I think it’s kind of disappointing that we’re doing it.

“I’m preparing a bill to specify that, as far as the official flag poles, it would only be the United States and Iowa flags, and we’ll see where that goes.”

He added: “I thought it was ridiculous. My question is, why are we doing that? Why is it anything but the United States flag or the Iowa flag?

“We’ll head down the path and see where we can get. I guess the question is, can I fly the Christian flag over it? Do I think that’s right? Well, not necessarily.

“Yeah, I’m solidly a Christian, but should I be flying my flag over somebody else’s instead of the Iowa flag or the United States flag?”

But it was Republican Skyler Wheeler who went to a whole new level with his comments. “It’s another way that the Rainbow Jihad continues to give those of us who don’t agree with them a finger in the eye and push their beliefs on us,” he said.

“Flags flown at our state Capitol should not be flags that fuel division among Iowans. How would the Rainbow Jihad react if we were trying to fly the Christian flag over the state Capitol?”

“The Rainbow Jihad is not OK with simply living their lives. They are so hellbent on pushing their beliefs on us that they would go so far as to fly that flag over the state Capitol. It’s one of the most egregious acts of political aggression I’ve ever seen.”

Speaking to the Iowa Starting Line, the Iowa Safe Schools’s executive director Nate Monson said: “It is disappointing to hear that Representatives Fisher and Wheeler would attempt to bully the LGBTQ community with name-calling.

“Trans Day of Remembrance is an international day meant to honor those who have been lost in the trans community due to hate and bigotry.

“Representatives Fisher and Wheeler might be surprised to learn that 22 Americans have been murdered this year alone because they were transgender.

“In 2016, Kedarie Johnson, an Iowa teenager, was murdered in Burlington because of their gender identity. This is not a political argument. This is about common decency.”

Nate added: “If the belief that all Iowans should be treated with respect and deserve a safe place to live and work is so alarming, Representatives Fisher and Wheeler should look into other forms of employment.”