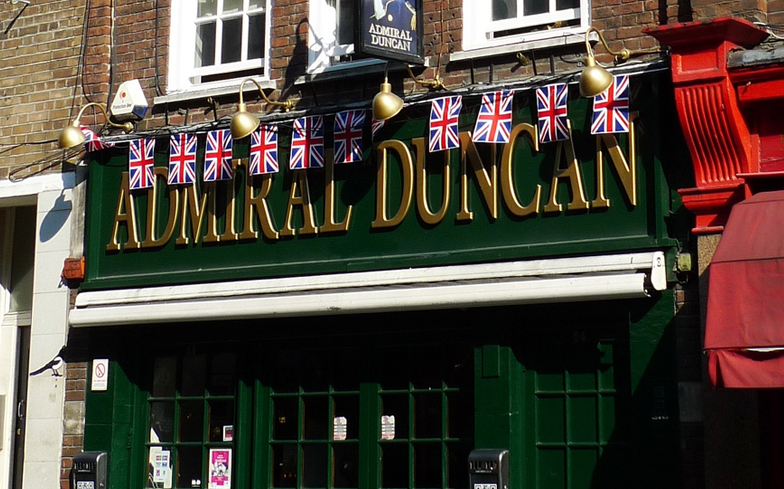 30 April marks 20 years since the Admiral Duncan bombing, which took place in 1999.

Walking past the blue pub front of the Old Compton Street venue today, patrons milling around outside, it is hard to imagine the carnage caused by  far right extremist David Copeland. The Soho attack was the third carried out by Copeland, following nail bombings in Brixton on 17 April, targeting the Black community, and Brick Lane on 24 April, targeting the Asian community.

As a 14-year-old gay teenager, struggling to come to terms with his sexuality, the Admiral Duncan bombing confirmed my worst fears, reminding me that the homophobic views expressed at school were mirrored by a proportion of the UK’s population.

The Admiral Duncan bombing took place on a Friday evening, at the beginning of a bank holiday weekend. Both the Brixton and Brick Lane attacks had left many seriously injured, as the bomber had lined the devices with four inch nails – one becoming lodged in a baby’s skull. But it was the Admiral Duncan bombing which claimed lives – Andrea Dykes, who was four months pregnant, Nick Moore and John Light. Four survivors also lost limbs.

In 1999, the year the bombing occurred, I had initially assumed that there must be an IRA link. Upon reading the newspapers I discovered far right organisations were trying to take credit for the attacks. It was also speculated that the Chinese, Irish and Jewish communities were at risk.

I find it problematic when I hear people discussing the Admiral Duncan bombing and the two preceding it, making the same mistake that I did when I was 14 and grouping them with IRA linked terror. These attacks are completely different. The Admiral Duncan Bombing is the worst homophobic attack the UK has ever experienced and the Brixton and Brick Lane bombings were clearly racially motivated.

On 12 June 2016, the US and the LGBTQ community globally were rocked by the Orlando shooting. Omar Mateen burst into the Pulse nightclub and began to shoot patrons. In total 49 people died, most of them gay men and many from Hispanic backgrounds, as the club was hosting a Latin Night. In the US there was criticism of both the Republican and Democratic Parties for their response to the shooting. Donald Trump focused on the ethnicity of the perpetrator, calling for tighter controls on immigration. The Democrats seized on the weapon wielded by Mateen, citing the massacre as an example of why more rigorous gun laws were needed in the US.

Neither party initially addressed the homophobia behind the attack, as if the identities of the victims were being erased. Even now it is rarely mentioned that most of the victims were Hispanic. There is a similar process of cultural erasure when the Admiral Duncan bombing is grouped with other terrorist attacks of the 1980s and 1990s.

This trend cannot simply be written off by saying that LGBTQ people are now more visible and therefore more likely to be victimised. We have to acknowledge that there is a minority within our population who do not believe in LGBTQ equality, and recognise the danger posed by the far right.

I strongly remember those images of the Admiral Duncan taken after the explosion in 1999, in particular the bright blue paintwork. It is still there, as testament to one of Soho’s oldest gay venues and the resilience of the LGBTQ community everywhere.

For anyone who would like to attend, a procession and Act of Remembrance commemorating the bombing will take place on 30 April. The procession will be leaving the Admiral Duncan at 6:10pm, with the ceremony taking place in St Anne’s Gardens.