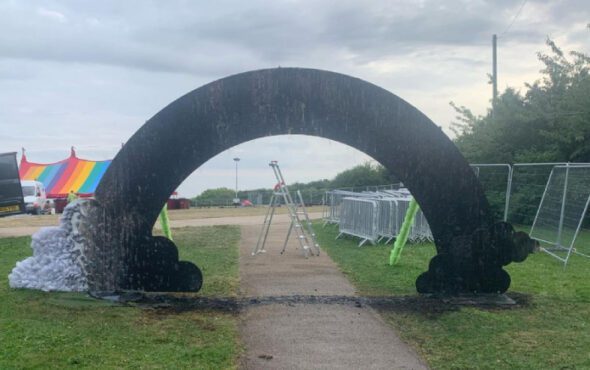 Pride organisers in Milton Keynes have shared that a rainbow arch was “deliberately” set on fire in what is likely a homophobic hate crime.

In an update from the Milton Keynes Pride Festival (MKPF), it was revealed that the arch “had been fenced and secured” which means it was likely set alight “on purpose”.

“MKPF team are extremely saddened to discover that a person or persons have deliberately broken into the PRIDE site and set fire to the beautiful rainbow arch that was donated by @mymiltonkeynes,” the statement shared on Instagram reads.

It continues: “The arch had been fenced and secured which means that the incident was undertaken on purpose. We had in excess of 14,000 people attend on Saturday and it was such [an] amazing day.

“Sadly this incident shows that there is still so much work to be done within MK in regards to the Homophobia, Lesphobia, Transphobia and other forms of discrimination the LGBTQ+ community face.”

The organisers also shared a picture of the arch before and after the incident, showing the extent of the damage.

A day after sharing what happened to the arch, the @mkpridefestival account thanked supporters for their kindness.

“The MKPF team would like to share how much it means that so many people have shared their solidarity regarding the incident yesterday morning,” the spokesperson on the account wrote. “We will fight negativity with positivity… Watch this space. LOVE IS LOVE.”

A representative from the Thames Valley Police is investigating the incident after firefighters were called to the scene at around 06:45am on 13 September.

Attempts were made to salvage the arch, though from the images shared it does not appear that this was successful.

“The fences were locked and the 24-hour security was doing a sweep of the site at The Parks Trust – Campbell Park Events Plateau,” MKPF director Keith Emmett III said.

“They noticed the arch had been set alight and acted quickly in alerting bucks fire brigade who came quickly to extinguish.”