Rabbi, buttmitzvah and tradition: A coming of age for queer Jews 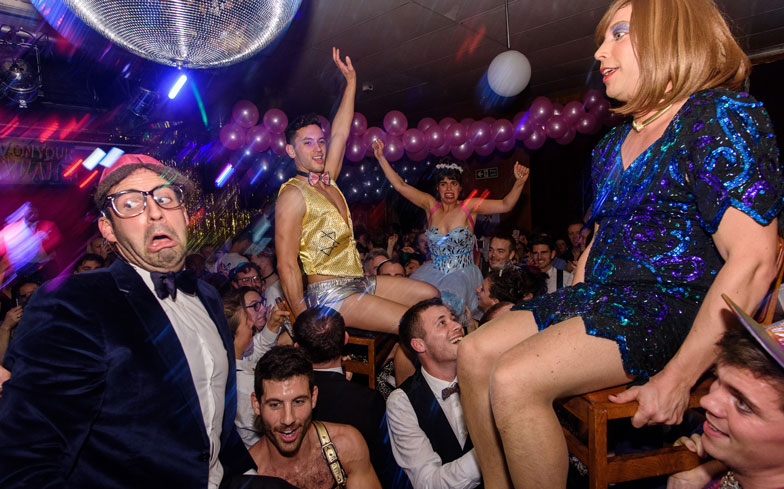 There’s an old Jewish joke I love: “Two Jews are stranded on a desert island, so they build three synagogues; one for the strictly orthodox Jew, one for the liberal Jew, and one that neither of them would ever set foot in!”

I know you should never explain a joke, but then, you probably shouldn’t start a niche interest article with niche humour either. The point of it is, Jews argue…and they love it. They argue about who is a Jew, who isn’t a Jew, who is a good Jew, who is a bad Jew, and who is just Jew-ish. That’s my caveat with this piece: I can’t speak for all Jews, but I can talk about things happening now in the community that feel, to many of us, like turning points.

I have to start at the start, and that means the Holocaust. I promise this article will get lighter – blame the editor for asking a Jew with anxiety to write a first person piece about identity.

There’s a speech in Angels in America that sums up why I have to start there. (Those of you who weren’t just ogling Russell Tovey’s adorable ears in the National Theatre production might even remember it). A rabbi is giving a eulogy to a universal Jewish mother figure – a survivor, an immigrant, the remnant of a family. The Rabbi says: “You can never make the crossing that she made…but for every day of your lives…in you, that journey is.” For many Jews, stories of our grandparents’ epic journeys to escape persecution and survive lives inside us. We were taught to carry it as a responsibility. It became a duty to continue tradition and to keep our culture alive, after it was so nearly wiped out. And how would we do that?

By going on to have our own traditional Jewish family. Fair enough, but for lots of Queer Jews, this was a problem. On the one hand, we wanted to continue our culture and be part of it. On the other, we couldn’t do that through having the traditional Jewish family that our friends, parents and grandparents expected of us. This meant that living a (sexually) fulfilling queer life and being Jewish wasn’t just a conflict of religious law, it became a conflict of culture. Don’t get me wrong, the religious law part didn’t help. Like most religions, if you read the laws literally, and if you’re into anal, it’s not great news. The same Old Testament verse that has been a sticking point in Christianity. “You shall not lie with a man as you lie with a woman for it is an abomination” has been a roadblock to acceptance for many in the Jewish community too. But even religious attitudes are changing thanks to pioneering organisations like KeshetUK that just weren’t there when I was growing up.

Related: Indian royal Amar Singh on his crusade against LGBTQ repression in his native country

KeshetUK was founded in 2012 to ensure nobody has to choose between being LGBTQ and being Jewish. Last year they ran training for community leaders who run religious Jewish camps for young people and gave them training on how to respond if a young person comes out to them. They went into Jewish faith schools and ran workshops for teachers, alongside assemblies, so that young LGBTQ people will feel they accepted in their religious environment.

Another big sign is something called Limmud. It’s an annual Jewish festival of learning where Jews gather to debate, discuss and study. Last year there were more than 30 LGBTQ themed sessions over a four day period, including panel discussions on gay conversion therapy, and another entitled What does the future hold for religious LGBTQ Jews? When I was dragged along as a sullen teenager, I don’t remember there being any LGBTQ content on offer (although I did manage a furtive snog behind the
bike sheds with a top hottie).

All of this has coincided with a number of synagogues last year starting to offer religious same-sex marriage to its LGBTQ congregants, including the one I grew up in. But for me personally, the religious law wasn’t the biggest problem. From a religious perspective, I was a pretty bad Jew anyway. I ate prawns, had an ear piercing, and used electricity on the Sabbath. What I found the hardest was feeling like my queer life and culture had to be separate to my Jewish culture.

Like all Jewish parties, it had to be over-catered so we filled the club with the sweet scent of chocolate fountains and Brick Lane beigels. We wanted people to experience the family side of a Jewish function, so we each took on characters in a fictional Jewish family called The Rimmers to greet every guest. Great Jewish starlets (in drag) performed, from Bette Midler to Barbra Streisand. There was even a fishbowl eating competition which caused a relationship to break up. It was an exhilarating hot mess, but people queued for hours and we knew we were on to something. Fast forward two years and we’ve got our shtick together. We throw three Buttmitzvahs a year. We have balloon arches, we pull in a big mixed crowd of 600 a time. There’s now two families we perform as: The Rimmers’ and The Clitovitzs, who kick off each Buttmitzvah with big, filthy, all-singing and all-dancing numbers, alongside celeb guests – but that’s not what makes it special.

It was at our Buttmitzvah a few months back that it all hit home for me. As I was lifted high on a chair, overlooking the crowd doing traditional circle dancing, I saw my mum in the distance – she was laughing with my boyfriend and her friends at the back of the club. I realised then that If you’d told my thirteen-year-old self that there was even such a thing as a queer Jewish club night, I wouldn’t have believed you. If you’d told me I’d be on stage performing, I’d have laughed. And if you’d told me I’d be there supported by my proud Jewish mum, and my proud boyfriend, I’d have cried. There’s still work to do. But whether it’s through the hard graft of community organisations tackling big religious questions, or through the joyful insanity of parties like Buttmitzvah, being a Queer Jew is starting to feel less like a contradiction, and more like a unique identity to shout about.