Queer London then and now: People, places and ideas that shaped my life 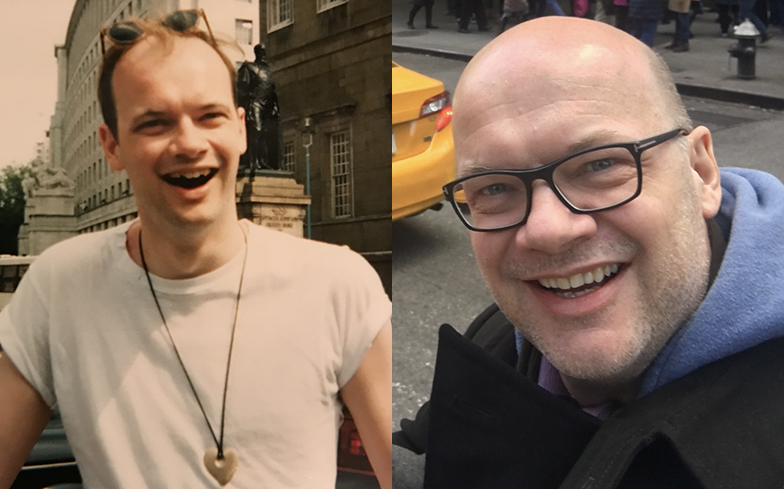 I am completely, unapologetically in love with London. I’ve lived here for 25 years and believe it to be the finest city in the world.

To mark LGBT History Month 2018 and its theme – Geography – mapping our world – I decided to map some of the people, places and ideas that shaped my life in the city I adore.

Wanderlust and Friends of Valerie.

My very first experience of London had no map. As a teenager I used to ride the 40 minutes into London where for hours I would just walk.

I couldn’t have told you then why but I know now that I was unconsciously looking for somewhere I could belong.  It is hard to recall in the digital age that it was once quite so difficult to find a new community – especially one half-hidden – outside your own.

I found my first ‘gay friendly’ landmark in the mid-80s when a schoolfriend took me to the original Patisserie Valerie. I fell instantly in love with its bohemian cafe atmosphere. With hindsight, I’m sure it was the tamest of introductions to gay life. But for a painfully self-conscious sixteen year old from Essex, it felt exotic and a passport into a new world.

Today Valerie’s Soho neighbourhood is less and less gay, but to me it will always be the place where I first tried to flirt and be cool and where, after a lot of searching, I caught my first glimpses of a different way of being.

Related: LGBTQ History Month is an important opportunity for us to recognise our shared history

Long before I learned of Barnardo’s Safe Zone allies programme, which has made Barnardo’s and its services welcoming places for LGBTQ people, my map of London was overlaid with its own safe and (much larger) unsafe zones.

At its epicentre was Old Compton Street and its surrounding streets. As important as it was to find welcoming bars and shops there, the real prize was feeling you were in a place, with a community, where you could be or find yourself. Where the act of holding hands or kissing someone wasn’t daring or even unusual. Whenever I stepped inside those zones, it brought a dizzying sense of being free.

But at either end of Old Compton Street or Soho’s fringes, as I crossed back into the wider world, without doing it consciously, held hands would spring apart and we would walk with greater distance between us. A matter of yards made public displays of affection suddenly fraught and the closet closed around me. I cannot remember the name of my first gay bar but I remember exactly where it was – on Hanway Street just off Oxford Street. The first time I went, I remember standing outside trying to pluck up the courage to cross a threshold that felt like a tangible barrier. Walking in was another turning point in my life.

Just as important, around the corner was the great gay café, First Out. And when it came to dancing, I saw pretty much every aspiring 90’s boy or girl band go through their routines first in Bang! at Astoria 2 and then upstairs at the legendary G.A.Y. in the Astoria proper.

But you won’t find any of these places on a map anymore. They have all gone to make way for Crossrail. A bit sad maybe but a reminder that London would cease to be London if it stopped changing – it’s the deal you have no choice but to make if you really love this city.

Related: Human beings aren’t products, why try and package us to all be the same?

In the 90’s, for me and my friends, only three gay bars mattered – the Edge in Soho Square, the Box near Seven Dials and Kudos on King William IV Street. We knew them as the Bar-muda Triangle. Many an hour and night was lost in one or other of them – and sometimes all as we rushed between them (FOMO not just being a 21st century disease).

None are gay venues any more (you can see a pattern emerging) but I walked those pavements so many times I could still navigate the streets between them blindfold today.

These bars also marked a sudden change in the geography of LGBTQ places. The first gay venues I had visited were ‘discreet’, behind blacked out windows or in windowless basements. It didn’t make them less fun but there was a sense of having to be closed off from the world. For me, it sent an unmistakeable message that being there was something to hide.

But these new bars were quite different – above ground, with big picture windows through which to see and be seen. They represented the possibility of being more open to the world and vice versa. There is one other personal London landmark to mention which isn’t a gay venue at all. But I include it because it is, for me, the most significant. Because Marine Ices in Chalk Farm is where I met my partner for the first time.

He didn’t know that he’d been set up on a date and it took all my skills of persuasion to get him to go out on a second. But he gave in eventually and we have lived together for the 24 years since, around the corner from Marine Ices. So that ice cream shop will always have a special place in my heart.

And you’ve guessed it, they knocked it down a few months ago…

Related: Who owns the trans money shot: us or them?

Maps are much more than pieces of paper and geography is more enduring than what surrounds you. They are living things.

I’m fortunate that, in time, the worlds I had kept separate through my teens and twenties eventually overlapped and blurred until they became one whole. I’ve seen most of the places I remember growing up swept away by the ever-changing city and then seen boundaries dissolve almost entirely in the digital age.

But throughout, I know that the maps I stumbled upon or learned then still ground me today. I carry them with me always.

More information on Barnardo’s can be found here.