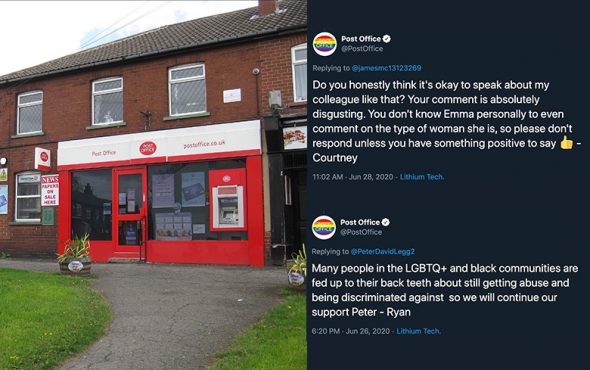 Courtney, Ryan, Stephen and several others from the company’s social media team have used their combined wit and sarcasm to effortlessly fend off anti-gay customers and educate them on the beauty of the LGBTQ+ community.

The homophobic vitriol started after the official Twitter account for Post Office shared an interview with one of their queer staff members, Emma, to reaffirm their commitment to LGBTQ+ people and Pride Month.

Sadly, the heartfelt video attracted many ignorant responses, with one user branding Emma as a “degenerate”.

This is when Courtney stepped in. “Do you honestly think it’s okay to speak about my colleague like that?” she hit back.

“Your comment is absolutely disgusting. You don’t know Emma personally to even comment on the type of woman she is, so please don’t respond unless you have something positive to say.” Another user said the LGBTQ+ community “creep him out” and Courtney didn’t stand for it, like at all.

“How original, I’ve never heard that one before,” she responded with a disgusted emoji face. “What’s so creepy about a human being falling in love with someone of the same sex? The LGBTQ+ community are no different to straight people.”

One person asked how Emma’s video factors into delivering the post, to which Ryan replied: “We’re proud to support Pride, diversity and inclusion are important values at Post Office. We are extremely proud that our colleagues feel able to share their journey with us as part of celebrating our diversity towards an inclusive supportive society.”

Stephen added: “These posts are celebrating Pride like many communities are, and as part of that we are proud to be sharing stories from our colleagues to celebrate our diversity towards an inclusive supportive society.”

In response to their tweets ‘offending’ customers, Ryan said: “If we are offending people by standing up for the LGBTQ+ community then so be it. It’s a very sad world we live in where 2 people falling in love with each other will offend someone.”

After one Twitter user called Courtney and Emma legends, Courtney responded: “Emma’s definitely up there with the legends, she’s a true inspiration and advocate for Pride. I feel so proud to work alongside her.”

Since the video was posted, the team – especially our new queero Courtney – have been tacking down homophobes left right and centre, and Gay Twitter has been living for it – see some of the Post Office’s best clapbacks below.

How original, I've never heard that one before 😒! What's so creepy about a human being falling in love with someone of the same sex? The LGBTQ+ community are no different to straight people, there shouldn't be an issue 👍😊🌈 – Courtney

Hey Matthew, we've been a huge supporter of pride for many years and as it's Pride month, we wanted to show our appreciation and support to the community 😊! We're not laying people off, I think you're getting us confused with Royal Mail, they're a separate company 🌈 – Courtney

Postoffice was in MY feed,the post office is using pride as a marketing stunt;the company couldn't give a toss about anything but money . And right,it's none of my business what two, three or a fuck load of people do with each other that's the point,no one needs anyone approval

Thank you for being an open and inclusive employer and trusted community partner.
Love how you’re educating the bigots, huge props to the social team! 🌈👍🏼

All those things you can do now. Why do you need a parade?

Do you publish all of your staff's love stories ?
Or just gay people's ?
Why?

It should be taken as read that you do not discriminate against any staff – but please cella rate those who go above and beyond for customers – not those just living their lives.

If we are offending people by standing up for the LGBTQ+ community then so be it Mark. It's a very sad world we live in where 2 people falling in love with each other will offend someone – Ryan

I still don't understand what the issue is. What's so wrong about the LGBTQ+ community? We're not in the 50's anymore James, times have changed and I think people need to understand that – Courtney

The Post Office should no more become involved in far left politics as it should in far right.

Huge numbers of gay people would never go on a Pride march bc it espouses leftist and far left politics.

The Post Office is publicly owned & should STAY OUT OF POLITICS.

What are you fed up with? If there wasn't so much prejudice, inequality and discrimination against the LGBTQ+ community, we wouldn't have to do it! Do you honestly think it's all about who someone has sex with? Says it all 😅 – Courtney

That's exactly why we post about and support Pride, to educate people like yourself. If you honestly think it's all about 'sex', you're very wrong 👍 – Courtney

Do you honestly think it's okay to speak about my colleague like that? Your comment is absolutely disgusting. You don't know Emma personally to even comment on the type of woman she is, so please don't respond unless you have something positive to say 👍 – Courtney

Is there a reason you're so inconsiderate towards the LGBTQ+ community? They're just like you and me, there's no reason for you to be so nasty! – Courtney

Please don't call my colleague 'simple', he's supporting the LGBTQ+ community and me. It was my fault that this issue got out of hand and Ryan did the best he could to help – Courtney

I'm sorry you feel that way. Our campaign's been shaped by our own LGBT+ network and we feel we're doing what's right. We fully respect your right to feel differently, but the many messages of thanks from throughout the LGBT+ community tells us not everyone agrees – Paul

I'm sorry you feel this way Keith. However, we want to show our support to the LGBTQ+ community, if you don't like it, then please don't comment 👍 – Courtney