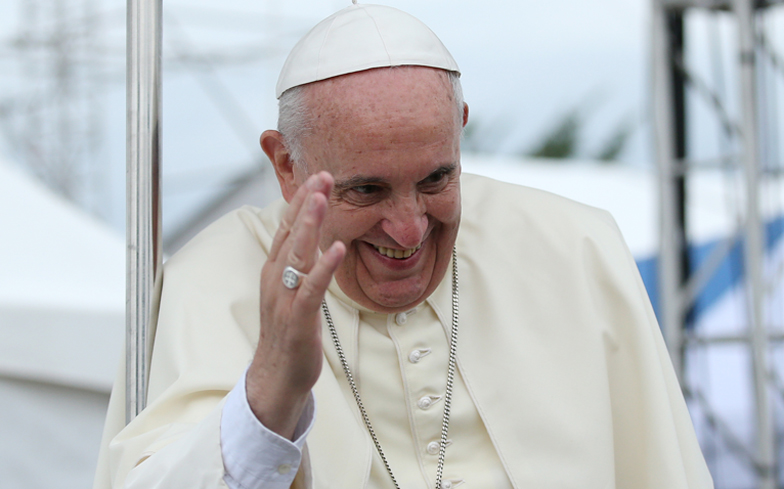 The seemingly progressive pope has taken another step backwards.

The Pope has continued to be wildly inconsistent with his views on LGBTQ rights, this time claiming that gay men can’t be part of the clergy, and that in some countries being gay was “fashionable.”

His views on gay men in the clergy follow on from allegations that in May he told bishops to refuse gay applicants. He was quoted as saying: “Keep an eye on the admissions to seminaries, keep your eyes open. If in doubt, better not let them enter.”

His new comments come from a soon to be published book, in which he speaks to the Spanish missionary Fernando Prado. The Catholic newspaper Avenwire published some excerpts from the book, surrounding homosexuality.

Answering a question about whether there should be any limitations on those who want to train to be part of the clergy, the Pope responded by saying: “When there are candidates with strong neuroses and imbalances, difficult to channel even with therapeutic help, one must not accept them either to the priesthood or to the consecrated life.

“We must help them to do other paths, without abandoning them. We need to direct them, but we must not admit them. We always remember that they are people who will live in the service of the Church, of the Christian community, of the people of God.

“Let us not forget this perspective. We must be careful that they are psychologically and emotionally healthy.” Prado then mentioned how that were some members of the clergy who were gay, and Pope Francis said that this was “something that worries me.”

He added: “That of homosexuality is a very serious matter, which must be discerned adequately from the beginning with the candidates, if this is the case.

“We must be demanding. In our societies it even seems that homosexuality is fashionable and this mentality, in some way, also affects the life of the Church.”

The Pope then shared a story about a bishop who had encountered gay men in his clergy, but decided that as it was just a “show of affection” there was nothing wrong with it.

“It is not just an expression of affection,” the Pope said. “In the consecrated life and in the priestly life there is no place for this kind of affection.

“Priests, religious men and women religious should be urged to live celibacy in full and, above all, to be perfectly responsible, trying not to create scandal in their communities or in the holy faithful people of God by living a double life. It is better that they leave the ministry or the consecrated life rather than live a double life.”

Despite seeming to be a progressive in some areas when it comes to LGBTQ rights, including telling a gay victim of clerical sexual abuse that God had made him gay and that he loved him anyway. He also congratulated a gay couple for baptising their child, although a Vatican source said that it was just a generic response.

On the negative side, and buckle up there’s a lot, he’s said that gay children should be taken to psychiatrists, refused to accept that LGBTQ families were real, said that teaching children about gender identity was “indoctrination”, and supported anti-same-sex marriage protesters in Mexico.